Token makes front page, UNESCO not so much 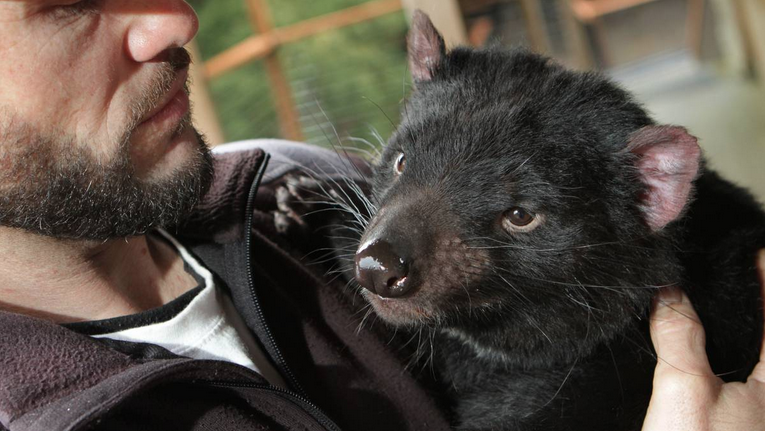 TTN, 1st June 2015: It is unclear what official process can ‘declare’ a state’s animal emblem. Of course most people and organisations, including Australian Geographic, already thought the Tasmanian Devil was Tasmania’s animal emblem.

Whilst the faux emblem announcement got NewsCorp’s Hobart Mercury front page for the state Liberal government on 1st June 2015, the government’s Environment, Parks and Heritage Minister Matthew Groom was getting a roasting over at Tasmania’s North West Advocate for putting Tasmania’s national parks at risk of mining and logging.

See below – first the NewsCorp/ Mercury story, then the Fairfax/ UNESCO story. 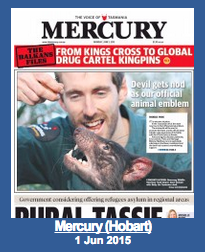 THE Tasmanian devil has a new champion — the whole state of Tasmania.

Mr Groom, who first raised the idea of an emblem in 2013, said public submissions had been considered and the devil had received overwhelming support.

“The Government is pleased to confirm that the Tasmanian devil has been officially declared the state’s animal emblem after being proclaimed by Her Excellency the Governor Kate Warner at a special Executive Council meeting held late last week,” Mr Groom said today.

“Declaring a formal animal emblem provides us with an opportunity to recognise, celebrate and promote our unique native fauna, particularly the Tasmanian devil.”

He said the devil was recognised as uniquely Tasmanian and having it as an emblem would promote the state and raise awareness of the devils’ challenges.

The facial tumour disease has slashed numbers, with predictions of extinction.

“There’s no negative to this decision. We’ve been the only state without an animal emblem. I think if we want to be the clean, green Tasmania, enticing tourists with wilderness … it’s crucial we have an emblem,” Mr Irons said.

“Not only is the devil known worldwide, for us to acknowledge its importance can only make us work harder to save them.

“A football team has its colours and logo, states are the same.”

“The devil is a Tasmanian icon around the world and it is fitting for it to be recognised in this way.”

Environment stoush will not help tourism

THE state government should avoid “picking a fight” with UNESCO over the way Tasmania’s World Heritage Area is managed, according to Labor environment spokesperson Craig Farrell.

UNESCO’s World Heritage Committee has said it was concerned the government’s draft management plan could open the area to logging and mining.

It called for the government to ensure that commercial logging and mining were not permitted within the area.

Mr Farrell yesterday said under the state government Tasmania had the world’s attention for the wrong reasons.

“Picking a fight with UNESCO over the way our World Heritage Area is managed will not be good for our tourism industry,” he said.

“The Liberals need to think their way through this very carefully and not put Tasmania’s reputation at risk.”

“(It) would damage Tasmania’s reputation and create risk for sectors like tourism and agriculture which are heavily brand-reliant,” he said.

The government was not doing enough to ensure its plan accorded with environmental guidelines set out by UNESCO, Mr McKim said.

“Mr Groom has insulted the World Heritage Committee by allowing for logging, mining and inappropriate development in his draft plan. He should not be surprised that they are coming down on him like a ton of bricks.”

The government should withdraw and redraft the plan to provide for the reinstatement of wilderness as a primary management objective, and to ensure proper management and protection of globally unique cultural and natural values, Mr McKim said.

Minister for the Environment, Parks and Heritage, Matthew Groom said the government recognised the TWWHA as one of the state’s most extraordinary cultural and natural assets.

“We are currently in the process of considering all of the public feedback received on the draft management plan in order to ensure that the final plan is consistent with Australia’s international obligations as well as the expectations of the broad Tasmanian community,” he said.

“As such, we welcome the World Heritage Committee’s report, and we have invited the committee’s technical advisers to come to Tasmania to visit the property and see firsthand the efforts being made to responsibly manage the area and to provide input as we finalise the TWWHA management plan.”