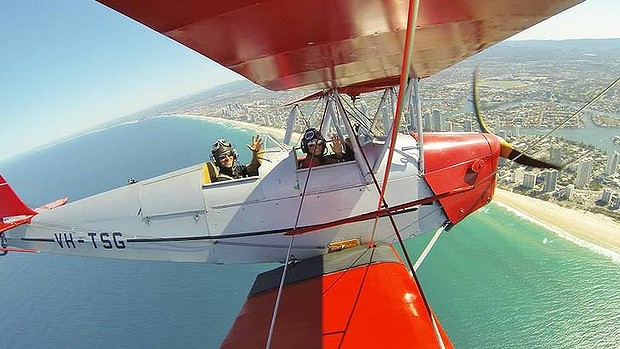 Investigators have discovered the wing of a vintage Tiger Moth failed before a fatal crash in south-east Queensland last Monday.

The 26-year-old pilot, Alex “Jim” Rae, and French tourist Taissia Umenc died when the Tiger Moth crashed off the coast of South Stradbroke Island during a joy flight.

Australian Transport Safety Bureau (ATSB) investigators have examined a mounted video camera that was recovered from the aircraft.

It shows the left wing failing about one minute into an aerobatic manoeuvre.

Witnesses say the biplane hit the water at high speed and broke apart.

Investigations, which are being headed by air safety experts from Canberra, are continuing.

Tiger Moth Joy Rides, the company that owned the plane, released a statement last week saying they were “deeply saddened” by the crash and have voluntarily stopped all flights.

The statement also expressed condolences to the family of Umenc and spoke highly of Rae, releasing a picture of him with one of the company’s planes.