Newcastle needs a hero – and it’s looking like Wests 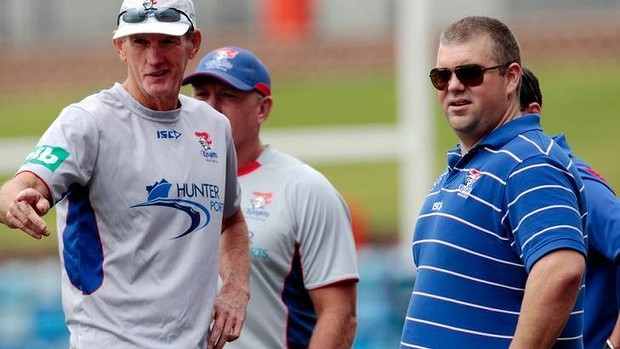 Three years ago he was one of Nathan Tinkler’s most vocal supporters. Now Newcastle Knights founding father Leigh Maughan says it is time for Tinkler’s Hunter Sports Group to hand the club back.

After HSG missed Monday’s deadline to have in place a $10.52 million bank guarantee, Tinkler has defaulted on the terms and conditions of his 2011 takeover, entitling the Knights Members Club to buy the NRL outfit back for $1.

NRL officials announced on Monday that it would be ‘‘business as usual at the Knights while further talks are held on the club’s future ownership and operating model’’, amid speculation that HSG has been negotiating to be involved in a revamped joint-venture operation.

But Maughan, the former NBN sports commentator who along with solicitor Michael Hill and real-estate agent Gerry Edser successfully lobbied to have Newcastle included in the 1988 NSW Rugby League competition, said HSG’s position was now untenable.

‘‘I did hang my hat on Nathan Tinkler,’’ Maughan said yesterday.

‘‘I had a couple of cups of coffee with him and found him to be a decent country boy, and quite frankly he saved the Knights from bankruptcy.

‘‘So I looked positively towards him, because that’s what he could provide and did provide. We must never forget that he put in $20 million.

‘‘But what’s gone on since, the money’s not the only thing that’s been lacking.

‘‘What is also lacking is the management skills … a lot of people like me are now wondering what the hell is going on in the joint.’’

Asked if he felt HSG could remain involved in some capacity, Maughan replied: ‘‘No … you can’t go belly-up and expect to stay on board.’’

Maughan said the obvious successor to HSG was the Wests Group, which provides the Knights’ training and administration base at Mayfield.

‘‘Wests are a rugby league club, they were with the Knights from the word go, they’re a very strong financial corporation and they’ve been very well managed over a long period of time,’’ he said.

‘‘They are the ideal one. My belief is [Wests CEO] Philip Gardner can turn them into an empire within three years.

‘‘He’d turn them into one of the biggest clubs in the competition.’’

Maughan’s disappointment in HSG is in stark contrast to his optimism three years ago, when he endorsed the Tinkler campaign.

‘‘We should carry Nathan down the street on our shoulders,’’ Maughan said at the time. ‘‘He single-handedly saved this joint … this joint would have been dead and buried without Nathan.’’

Former Knights chairman Rob Tew, who brokered the privatisation deed of sale on which Tinkler has reneged, said any future involvement of HSG would hinge on the club’s financial position.

“The most important action for members now that the guarantee funds are secure, is to ensure a transparent investigation of the HSG-owned Knights accounts is carried out and made available to members,’’ Tew said.

‘‘Once that is completed and there is a clear understanding of the liabilities as they sit on the balance sheet, members can make an informed decision of what action they wish to pursue and it will also be obvious at that time what parties are entitled to be considered to remain in any future restructure of the Knights.

“It has been widely stated by HSG/Knights representatives over recent weeks that all expenses, wages and entitlements applicable to the Knights are being paid on time – therefore a full disclosure of the accounts to members should be a straightforward formality.”

NIB chief executive Mark Fitzgibbon chose his words carefully and declined to express an opinion on whether HSG should remain involved.

‘‘We’re looking forward to a resolution of the matter,’’ Fitzgibbon said.

‘‘It’s not good for the Knights brand or any brand associated with it, this current uncertainty.

‘‘Certainly as a major sponsor we would expect whatever entity assumes control of the Knights to have a much higher level of corporate governance and professionalism than we’ve observed in the past.’’

The president of the Knights Old Boys, John Laut, said he could only express ‘‘a personal opinion’’ because he had not formally consulted his constituents, the former players who Tinkler wooed in the lead-up to the 2011 election.

‘‘I wouldn’t bar them [HSG] altogether, but in my opinion they certainly couldn’t be the dominant party,’’ Laut said.

‘‘Nathan Tinkler has channelled a lot of money into it … but if they were to stay involved, there would have to be some more stringent policies set out.’’

Like Tew, Laut said everything would hinge on the Knights’ financial position.

Informed sources have told Fairfax Media that a forensic audit of HSG’s accounts would be likely to reveal millions of dollars in liabilities.

Gardner told the Herald two weeks ago that, if HSG was unable to meet its commitments, ‘‘Wests would obviously be part of any solution if that was what the Knights members club wanted’’.

Last week he said it was ‘‘quite ludicrous’’ to say HSG could remain involved if it defaulted on the bank guarantee stipulation.

Nathan Tinkler holds on to Newcastle Knights for time being

The ownership of the Newcastle Knights is up for grabs after Nathan Tinkler’s Hunter Sports Group failed on Monday  to meet a deadline to provide a new $10.52 million bank guarantee.

The guarantee, which was to have provided a financial safety net for the Knights until January 31 next year, was due by 5pm.

By missing that deadline, Tinkler has technically defaulted on the terms and conditions of the privatisation agreement HSG signed in August 2011, clearing the way for the Knights Members’ Club to begin the process to buy back Newcastle’s National Rugby League club for $1.

The members’ club did not exercise that option immediately and has instead entered into talks with HSG brokered by the National Rugby League.

The club will continue to be administered by HSG while the talks continue.

In a statement issued at 5.30pm on Monday, the NRL said it would be ‘‘business as usual at the Knights while further talks are held on the club’s future ownership and operating model’’.

Tony Crawford, the NRL head of club and state services, said the members’ club and HSG had agreed to hold off any further action in relation to the club’s ownership while the NRL holds talks  with both parties.

‘‘The members’ club has agreed to defer any move to transfer the ownership of the club so commercial discussions can take place. Those discussions will be led by the NRL,’’ Crawford said.

‘‘In the meantime, it is business as usual for the Newcastle Knights. This will give all parties a chance to explore all options which are in the long-term interests of the Knights.’’

The NRL said negotiations would be confidential, could take some time to be completed, and none of the parties will make any public comment until they are completed.

The Knights issued a statement shortly after 5.30pm saying the NRL, HSG and members’ club were ‘‘continuing to work through a unified business model for the Newcastle Knights’’.

As well as re-issuing the NRL statement, the Knights said they ‘‘remain focused on the operations of the club and will not be involved throughout the confidential negotiation process’’.

‘‘As Knights’ management is not involved in the process, there will be no further comment from the club until negotiations are complete,’’ the Knights said.

‘‘The bank guarantee ($10.52 million) has been transferred into a joint-signatory bank account between the HSG and members’ club.’’

Knights Members’ Club chairman Nick Dan said through a spokesperson that he would not comment about developments until the end of the week.

Dan accessed the existing bank guarantee late last week by depositing cheques of $10.3 million from Westpac and $220,000 from the Greater Newcastle Building Society into a joint-signatory account.

HSG chief executive Troy Palmer offered no comment when contacted by the Newcastle Herald on Monday .

Knights chairman Paul Harragon indicated in a television interview on Sunday that changes to the club’s ownership and management structure were imminent.

‘‘There will be an announcement in the next week or two in respects to a reformation of the club, that’s true,’’ Harragon told The Sunday Footy Show.

‘‘It is quite a challenging time in its own right. I would say time frame-wise in the next week or two there will be an announcement.’’