The importance of cultural exports in film 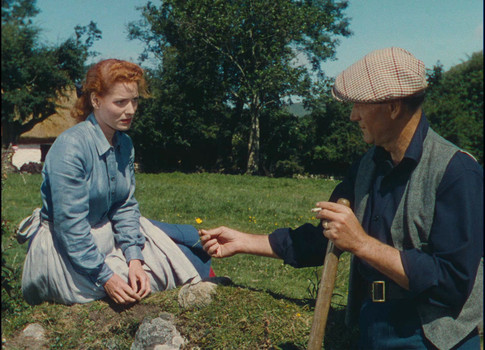 The Quiet Town: a village, a film and Irish identity

Listen to MP3 of this story ( minutes)

ELIZABETH JACKSON: When our Europe correspondent Mary Gearin recently went on holidays to Ireland with her family, on a whim they travelled to a small village on the west coast called Cong, in the beautiful Connemara district.

Why? Well because an internet search told them it was the place The Quiet Man, the much-loved Hollywood classic, was filmed.

What Mary found when she got there was an industry, an obsession and a very pleasant town.

MARY GEARIN: If you recognise that, well you’re a tragic like me.

I’ve loved The Quiet Man since I saw it as a young girl, and I’m among countless aficionados all over the world.

For the uninitiated, The Quiet Man is a love letter to Ireland by legendary director John Ford.

It’s the story of a retired American boxer – Sean Thornton, played by John Wayne – who goes to the mythical town of Innisfree and falls in love with Mary Kate Danaher – Maureen O’Hara – of the fiery hair and fiery heart.

It’s a film that plays on every sentimental string about Ireland and its foibles.

(Excerpt from The Quiet Man)

WOMAN: Could you use a little water in your whiskey?

MARY GEARIN: I knew the film was a classic and I even noted in Dublin that Irish tweed hats are marketed as Quiet Man hats.

But before I travelled to Cong, nestled among ridiculously beautiful emerald pastures and stone walls, little did I know how much this village and this country depend on this romantic postcard from the past.

As you enter Cong, images of Wayne and O’Hara are everywhere – in cafes, in shops, in toilets. The pubs bear the names of those in the film. Tourists can be seen roaming the countryside poring over maps to see which house or paddock relates to which scene.

MARTINE LANE: So you’re all very welcome to Cong village and to The Quiet Man walking tour.

MARTINE LANE: I started working here in April of this year. And I’m from Ballinrobe which is only a 15 minute drive from here, so I’m kind of local. It was great to be able to get work here.

MARY GEARIN: How many times did you have to see the movie to be a tour guide?

MARTINE LANE: Well I watched it first as a child, but then I didn’t appreciate it enough back then. But, before I started working here, I watched it about four or five times before then. And I just fell in love with it.

MARY GEARIN: Gerry Collins and his wife Margaret have been in the engine room of Cong’s Quiet Man tourism machine. It started up relatively recently.

GERRY COLLINS: Yes, back in 1985 we opened up a holiday centre here in Cong. And one of our guests came from Northern Ireland and asked us do we show The Quiet Man here. And I said no we don’t. So he said I’ll bring you a recording of The Quiet Man the next time I’m down. So we’ve played it every night since that.

GERRY COLLINS: Every night of the week. We decided we’d do The Quiet Man museum in the village, because there was no place for The Quiet Man enthusiasts to visit.

MARY GEARIN: So many people do you think come to Cong every year to see the landscape that was in Innisfree?

I’d say about 50,000 or so every year. The biggest amount of people are the Americans, from all over the world after that – Japan, China, everywhere.

MARY GEARIN: Are you still showing that film every night?

GERRY COLLINS: We’re showing it tonight at 8 o’clock in the mini cinema. The only thing that interfered with that was the World Cup every four years and then there’d be massive rows here, had an awful time so we had to get a second television set for the World Cup people. Because The Quiet Man enthusiasts just didn’t want anything, only The Quiet Man.

MARY GEARIN: Aren’t you sick of it by now?

MARY GEARIN: Cong gave the world The Quiet Man, but the film brought the world, in a rush, to Cong.

A huge production crew arrived in the hamlet and lived there for several months. Many of the stars brought out their whole family, including John Wayne, meeting and mingling with locals, many of whom acted in the movie.

Years later, one of Wayne’s sons Michael recalled the film’s impact on the village.

MICHAEL WAYNE: The Cong got electricity while we were there. This was in 1951. I remember they had the lights on the wires, you know. All around the kind of the town square. And the people were dancing, the people were very, very happy.

Then they found out that they had to pay for this electricity. They said, well we don’t need it. You know? Get rid of it. And they really said we really don’t need the electricity.

The Quiet Man might well be considered a paddywhackery reference guide.

While the film has brought fame and fortune to the town, it needs to remain a living film set, at least to attract tourists like Jacintha and Fred Levy from Dublin.

JACINTHA LEVY: Well we came out here to see the pub where The Quiet Man was made, because my husband is a big fan of the film. So we’ve been staying in Galway, so we said we’d come out and just have a wander around and see what it’s all about.

MARY GEARIN: Is it worth it?

MARY GEARIN: Is it everything you thought it would be like?

MARY GEARIN: My husband likes it as well, but I think part of the fantasy was that Maureen O’Hara in here heyday would walk around the corner. Have you been looking for that?

FRED LEVY: Yeah, I’m a fan of her. But I’ve been looking for the sun as well, I can’t find that either.

MARY GEARIN: Gerry Collins says, locally, the fans are known as Quiet Man crazies, but that’s a term of affection, for a good reason.

GERRY COLLINS: They’re very important to the economy of Cong. I reckon 80 or 90 per cent of the people that are coming into Cong are Quiet Man enthusiasts. It’s really, really great for Cong.

MARY GEARIN: And for Ireland itself I guess, in terms of that overall tourism as well.

GERRY COLLINS: Because, every minute of every day, somewhere in the world, The Quiet Man is shown. Somebody is watching Cong in The Quiet Man and watching Ireland. And it’s been the best promoter of Ireland.

MARY GEARIN: Of course, it promotes an Ireland that used to be as well. It’s pretty picture postcard. Is there pressure on Cong not to change from this image that some might call twee or old fashioned?

GERRY COLLINS: No, no, no, no, no. Cong, all the residents here in Cong absolutely love all the tourists coming in. Cong is moving on naturally as time moves on. One of the guide books, the Rough Guide, said that Cong’s stuck in the 50s. But I think it’s a great thing if they’re stuck in the 50s. That’s what tourists want to see. So what?

MARY GEARIN: And for those who have seen the film?

Yes, I know, the film is dated – in its attitude towards violence in general, and towards violence against women in particular. Although I, for one, love Mary Kate’s impassioned defence of her dowry, and the profound meaning it held for her as a woman in and of that time.

The whole film is an ode to a past that, in some ways, has thankfully gone, and in some ways has been thankfully captured in the time capsule that is Cong.

If you do decide to swing by, Cong will welcome you and to be sure, they’ll pour your drinks with a fine steady hand.

To understand that, well you’ll have to watch the movie.

This is Mary Gearin in Cong for Correspondents Report.

The Quiet Man it is.