The A-League: where bored fans go to riot 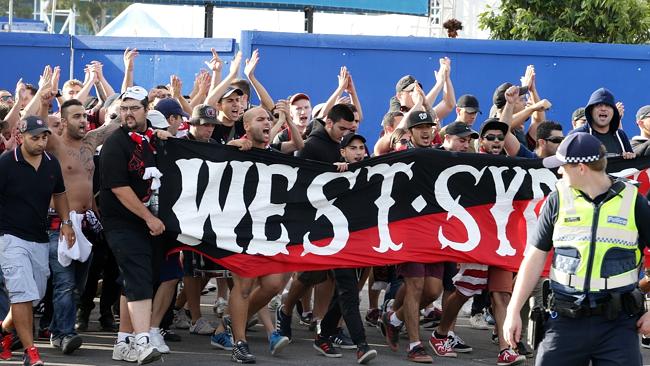 BRAWLING soccer fans threw chairs and set off flares outside a CBD pub ahead of Saturday night’s A-League clash between Melbourne Victory and Western Sydney Wanderers.

Dozens of Western Sydney fans were drinking at Bourke St’s Royal Melbourne Hotel before they clashed with a group of Melbourne Victory supporters about 3.30pm.

The riot moved on to the street, where flares were set off, chairs from outside the pub were thrown and glasses were smashed.

Police intervened in the brawl, which saw four people treated for minor injuries, including a man who was taken to hospital.

At least 200 Western Sydney fans marched along the Yarra and Swan St to AAMI Park with a heavy police escort.

They chanted “F— the Victory” and gave the finger to any Melbourne fans they saw on the way to the stadium.

Wanderers fans set off five flares during the match against Victory.

Orange smoke blanketed the field with about 15 minutes left in the match. 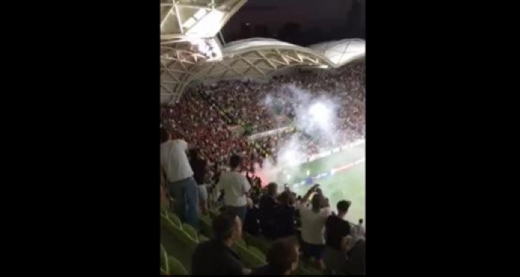 A flare is let off among the Wanderers fans at AAMI Park. Picture: Andrew Tauber

Security surrounded the fans as one of the flares landed close to the field of play.

Several Western Sydney supporters were ejected from their seats by police and security guards as Melbourne fans chanted “Go home” and “F— off Sydney”.

Another flare was set off after the match as Victory fans celebrated a late equaliser which sealed a 1-1 result.

They chanted in the concourse behind the grandstands as police formed a line to separate and then push them away from where Western Sydney fans were exiting the stadium.

A worker at the Royal Melbourne Hotel said she saw the crowd “rioting down the street” when she arrived at work on Saturday afternoon and said it was “enormous”.

Ambulance Victoria confirmed a man in his early 20s was taken to the Royal Melbourne Hospital with an upper-body injury.

He remains in a stable condition.

Two other patients were assessed at the scene by ambulance crews.

“No one was arrested and we have received no complaints of assault,” Ms Batty said.

Last Saturday, police had to step in after fans set off flares near Richmond Station before the derby between Melbourne Victory and Melbourne Heart.