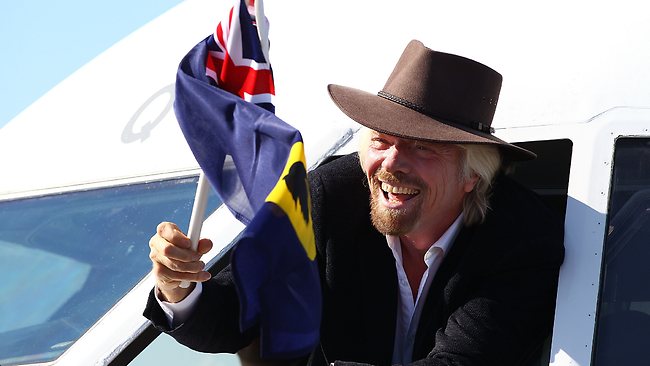 VIRGIN founder Richard Branson has launched a scathing attack on Qantas on his UK blog, arguing that if the flying kangaroo was better managed and offered a decent public service “it would not be in the financial mess it is currently claiming it is in”.

Sir Richard’s comments, which have been picked up by the UK media, depict Qantas as a market giant “with a myriad of foreign alliances and advantages” determined to bleed Virgin dry.

But he says the superior quality of Virgin’s management and staff has allowed it to create a more level playing field offering more customer value and choice.

“Today Qantas’ alliances are still larger than Virgin’s but our improved position is having a big impact on Qantas, who are now complaining about the intensified competition,” he says. “It seems strange to me that a Liberal Government would even consider tilting the playing field once again in Qantas’ favour. It would be grossly unfair, undermine the great work of Virgin Australia’s management team and staff and bewilder investors in Australia and worldwide.

“If Qantas was better managed and offered the public a decent service; it would not be in the financial mess it is currently claiming it is in. Government should be there to encourage competition, not to prop up the weak when the going gets tough.”

This is the second time the British entrepreneur, whose Virgin Group still has a 10 per cent stake in the airline he founded more than a decade ago, has bought into the Qantas campaign.

The three airlines took up their full entitlements and stand to expand their stakes by a yet-to-be-determined amount that is dependent on the take-up by retail shareholders and in two cases on Foreign Investment Review Board approval.

Qantas, which has been seeking a government guarantee to protect its jealously guarded investment credit rating, has written to the government calling on it to cancel Virgin Australia’s international flying rights and has also said it wants the FIRB process examined.

A Qantas spokesman said the airline thrived on competition and everyone except Virgin now recognised that the playing field is tipped in the smaller airline’s favour.

“Their battler status is far behind them, thanks to the backing of three government-owned foreign airlines covering their losses,’’ he said.

“Qantas doesn’t have that luxury and yet our customers have never been better served. That’s thanks to Qantas staff, who are the people responsible for our record customer service ratings. We’re not interested in a slanging match, we’re interested in a serious debate about the true nature of the Australian aviation market.”