That’s a bribe where I come from 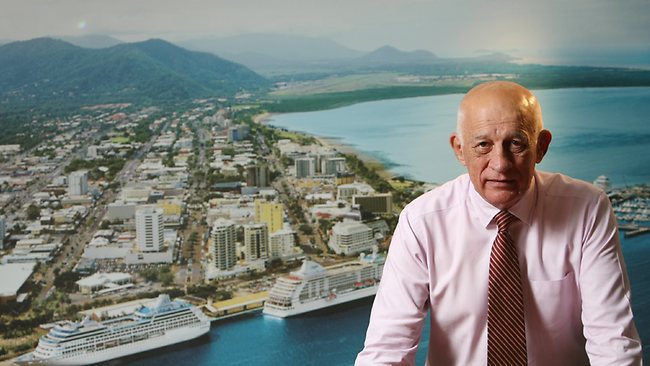 Mayor of Cairns Bob Manning said the cash contribution from Aquis would not affect the council’s decision when lodged. Picture: Brendan Francis

A COMMUNITY benefit fund bankrolled by Hong Kong billionaire Tony Fung is set to sweeten the family’s multi-billion dollar bid for a Yorkeys Knob casino. While the fund could lead to the construction of a sports stadium near the CBD, Cairns Regional Council Mayor Bob Manning said the contribution would not affect council’s decision when a development application was lodged. Manning also spent this past Friday night with Mr. Fung, and concedes that other town projects were halted pending Mr. Fung’s contributions. Full details from The Cairns Post below.

A Queensland commerical property specialist, who prefers not to be named, has described the transactions Manning has overseen as ‘questionable’ but not illegal.

Whilst NSW’ red tape on developments is infamous, the NSW government has recently implemented the Planning Assessment Commission, an independent adjudicating panel that weighs the interests in projects between developers and communities.

Earilier this week from The Tourism News editorial:

A major new aquarium development was approved by Cairns Council even though the Council’s required 114 car spaces aren’t planned for in the developer’s drawings. Now the council is asking for $3m from the developer to take care of parking. So why were plans that only allowed for 38 spaces approved? Journalists are latching onto many councils’ uses of parking as pawn in the eternal struggle between developers and communities. On the 10th March ABC Radio broadcast a story about the cost of Sydney CBD parking costs being double that of the CBD of Boston US. That story is not visible online at 8.27 am 10th March.

See the story about Cairns about the new aquarium parking here.

While the fund could lead to the construction of a sports stadium near the CBD, Cairns Regional Council Mayor Bob Manning said the contribution would not affect council’s decision when a development application was lodged.

“There is a legal obligation to assess these applications on its merits and that’s what we will do,” Cr Manning told The Cairns Post.

AQUIS AMONG 7 BIDDERS FOR RESORT DEVELOPMENT

Cr Manning met with Mr Fung “for a couple of hours” on Friday night to talk about potential community contributions.

“It was a very constructive and open discussion but it didn’t get into great depths,” Cr Manning said.

“Aquis reported on where they were at and brought us up to speed as much as they could.”

It is understood the developers are in the process of establishing a legal entity which would hold the community benefit funds.

“The council has been mindful of the fact there may be an opportunity at some point where some community benefit would arise out of all of this. That explains why we haven’t done some things around town because this may come into play.”

Waiting for a possible beneficiary to build a sports stadium or performing arts centre was a business tactic, the mayor said.

“There haven’t been delays.

AQUIS CHIPS ARE UP

“We always had in mind that this could come on to the table.

“From the day this (Aquis) started it was always going to be a long and complicated process.”

“We are not a direct player in this until the development application is submitted.

“If this happens, then there will be a direct benefit and direct impact on the council and the community.”

A BET BOTH WAYS

CITY BUSINESSES COUNT THEMSELVES IN FOR AQUIS

DEVELOPERS PREPARE TO HAND OVER EIS

AQUIS OUT TO EASE PUBLIC CONCERN

CAIRNS COUNCIL TO SPEND $524K ON OUTSIDE HELP FOR CASINO