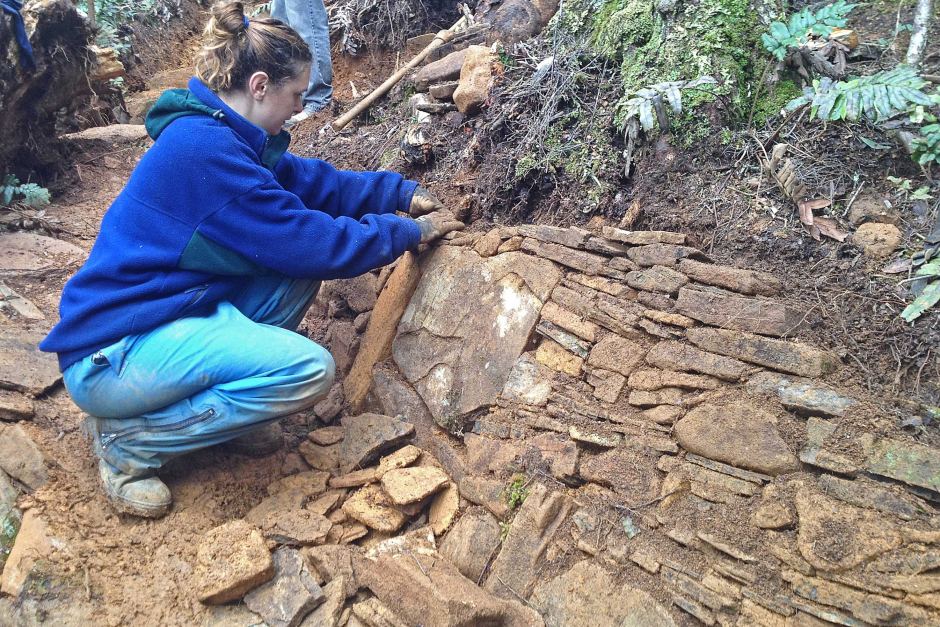 ‘Stone pitching’, an ancient Scottish building methodology is experiencing a surge in popularity as stoneworking companies realise the that tourism orgs and councils will pay nominal fees for stones and supervision… and the work can be done by locals wanting to learn new skills. In this Tasmanian example, a stone mason even joins in the effort to broaden his skill set. Stone-pitched paths, particularly useful in muddy terrain, enjoy the tourism benefit of looking 100 years old after only ten years, as mud and foliage absorbs the form.

Immediately below is the ABC story, and some detailed information of the Tasmanian example, from Environment Tasmania, is below that.

Higgs Track near Deloraine gets a stony facelift

A team of track builders repairing a hiking trail near Deloraine is learning an old Scottish stonework technique.

The workers are using stone-pitching to pave a 60-metre section of the Higgs Track in the Western Tiers.

The technique involves hammering wedge-shaped rocks into the soil and was developed in the Scottish highlands hundreds of years ago.

The owner of the track building company, John Hughes, says the new stonework should last hundreds of years.

“The stone walls on the edges will moss over and in 10 years’ time people will say, ‘Oh, this must have been done about 100 years ago’,” he said.

“So that’s the beauty of doing this sort of work – it just really blends in eventually.”

One builder, Ursula Mailfert, says the work is creative and satisfying.

“It’s nice to think that you’re doing something lasting,” she said.

The track was created by farmers more than a century ago as a pathway for getting cattle to grazing land.

Now it leads hikers to historic mountain huts, but sections of the track are badly eroded.

Stone-pitching is a technique developed hundreds of years ago in the Scottish highlands.

It is painstaking work that involves hammering wedge-shaped rocks into the soil and cannot be rushed.

“You can sort of get over a metre and a half, two metres done a day, depends on whether you’ve got a lot of rock,” said Mr Hughes.

“It’s sort of similar to cobbling in some aspects, so yeah I think it’ll have some demand for sure,” he said.

The track builders mastering these techniques are taking them to other parts of Australia.

Stone-pitching is now being used on bush tracks in the Victorian Alps, around Alice Springs and in Queensland rainforests.

Working with local communities to build and promote walking tracks

We are currently project managing several walking track projects around the state. These projects are supported by Environment Tasmania, through funding from the Australian Government.

The new walking track to the Big Tree and other spectacular forest giants in the Blue Tier is destined to be one of Tasmania’s greatest short walks. The track is due for completion by October 2014.

This 2.3 kilometre walk travels through mixed species native forest with rainforest understorey in the Groom River Valley among giant blue gums. The forests are breath-taking with glades of sassafras, myrtles and tree ferns as well as giant Eucalyptus regnans trees, including the Cradle Tree, the Twin Sisters tree, and the Blue Tier Giant which has a massive girth and a height of over 70m.

The Cradle Tree, one of the forest giants on the Blue Tier Giant Walk (image: Rob Blakers)

The track will be close to St Helens and the Bay of Fires, and will complement a diversity of existing walks including Halls Falls and the track from Poimena to Weldborough.

Bridge being constructed on the Blue Tier Giant Walk

With support from Mountain Huts Preservation Society and Friends of the Western Tiers, track crews and volunteers are repairing sections of this historical track. Once the only access route from Jackeys Marsh south, the track was used as a stock route until the 1970s. The track was built by the local community in the 1880s using traditional stone walling, but has fallen into disrepair in recent years. In 2010 the Mountain Huts Preservation Society and Parks and Wildlife Service replaced the two bridges, using traditional materials such as hand split timber decking.

Track work funded through this project includes track clearing and stone pitching on steep eroded sections of the track.

Community involvement with this project has included a visit to the track by members of Mountain Huts Preservation Society and students from Meander School. 18 kids from grades 2 to 6 recently braved winter weather to walk up Warners Track and learn about track building. They were joined by local community members who shared stories of the track’s history over a campfire with billy tea and damper. And along the way they met with our track workers to learn about traditional stone work techniques for track building.

Higgs Track is the main access track onto the Central Plateau and was originally built as a stock route. Deeply eroded sections of track are being repaired using stone pitching techniques, and the track crew includes locals from the Meander who are being trained to learn skills in stonework. The lower section of the track crosses Dale Brook and a temporary log crossing will be replaced with an aesthetically designed foot bridge using natural timbers. Mountain Huts Preservation Society volunteers will be assisting with installing the new bridge and have provided input into the bridge design. The bridge will be built with sustainable local timber such as macrocarpa sourced sustainably from farms in NW Tasmania.

Our trackies at Higgs Track have worked in all weather conditions including heavy snow. Pictured here are Andrew, Pete, Beth and Ursula.