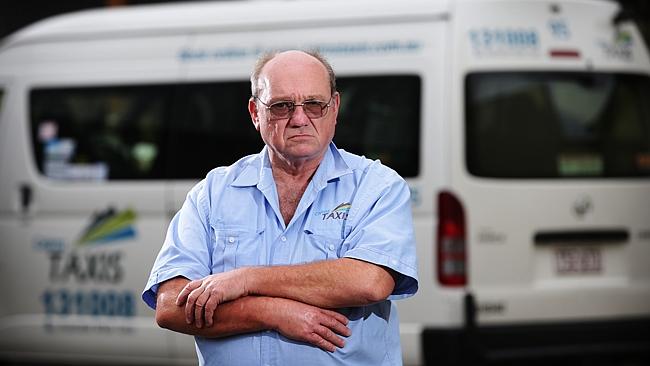 A CAIRNS taxi owner wants jail time for people who assault drivers after a 62-year-old man was allegedly attacked at the weekend and the vehicle pulled to pieces by a drunken thug.

It comes as union officials fear drivers will “leave the industry in droves” if penalties are not increased, particularly in Cairns where violent transport incidents are “prevalent”.

Driver Bob Richardson was allegedly punched in the back of the head at Gordonvale in the early hours of Saturday morning after he picked up a group of people at a pub and drove them to a McDonald’s restaurant.

One man started causing trouble and allegedly became aggressive when Mr Richardson told them he wouldn’t take them further because of the man’s behaviour.

Mr Richardson said he was forced to sit and hope for the best while the man allegedly tried to smash his way back into the maxi taxi, ripping the sliding door and mirrors off and shattering the weather shield.

“I had my window up and the door locked – he kept trying to smash the window,” he said.

“He was belting his head against the glass.

“My concern was if he got a stone or something and shattered the window. All I could do was sit in my seat and hope nothing happened.”

A police dog squad was deployed to find the suspect after he allegedly ran from the scene into nearby cane fields. District duty officer Sen-Sgt John Rhodes said investigations were continuing but police expected to charge a man with wilful damage and common assault.

“People have a right to go about their employment without fear of damage or injury,” he said.

Mr Richardson suffered bruising to the back of his neck in the incident.

Mr Richardson has been driving taxis for about six years and said it was first time he had been assaulted on the job. He reckoned lockout hours should be staggered and people cut off from the bar earlier to prevent crowds gathering on the street and becoming rowdy before trying to head home.

“You get it every week,” Mr Beitzel said.

“(Bob) is putting on a brave face but nobody deserves to be attacked like that.”

Mr Beitzel was forced to hire a replacement vehicle and he anticipated repairs would cost more than $1000.

The maxi taxi had only returned to the road that day because it was being fixed following a prang. Mr Beitzel said offenders must be made to pay for damage and should spend time behind bars.

“If you catch the person, deal with them correctly,” Mr Beitzel said.

Transport Workers Union (TWU) state secretary Peter Biagini said drivers would leave their jobs if they didn’t feel safe, and could present danger to other road users if they were trying to work while in fear of their lives.

“It’s so important that we protect them to ensure they feel safe to do their job,” he said.

“Otherwise they will just leave the industry in droves. We would hate to see them take matters into their owns hands, taking a weapon themselves.”

Mr Biagini said TWU had been calling on the State Government to increase penalties for two years.