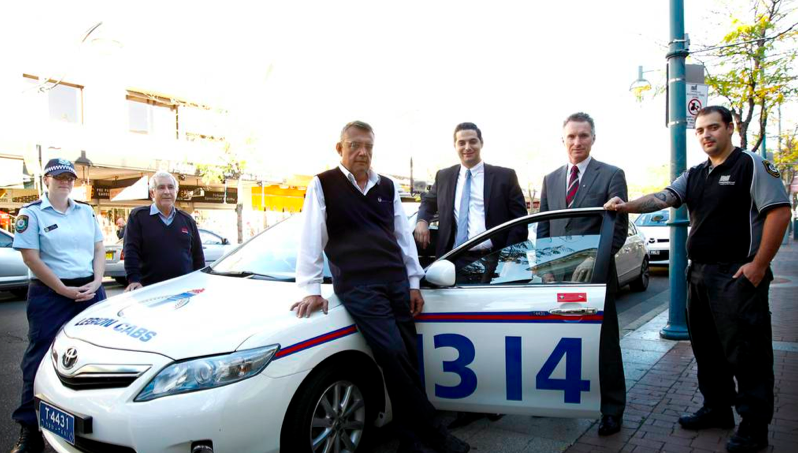 Photo: Roy Wakelin-King of the Taxi Council of NSW. This photo from the Liverpool Champion demonstrates the many-fingered pie that is the taxi industry.

An ABC investigation has obtained damning evidence suggesting some taxis on Sydney’s roads are putting lives at risk because they are falsely being deemed roadworthy.

Looking at key safety aspects, including brakes, suspension, tyres and general roadworthiness, a litany of safety breaches were found.

Michael Hatrick has been driving taxis in Sydney for more than 30 years. At the beginning of every shift he always has concerns, including whether there will be enough fares and how bad the traffic will be.

But over the past few years Mr Hatrick says he has had additional anxieties about the roadworthiness of the cars he drives.

“Most significant things are problems with brakes, suspension, quite often steering [and] tyres,” he said.

Mr Hatrick has been so worried that he has agreed to have the cars he drives independently examined by a licensed mechanic.

That decision could cost him his job, but he claims to be so alarmed about the current state of the taxi industry that he is willing to take that risk.

“Many of the cars that I get to drive and I see other people driving are in an appalling state of roadworthiness,” he said.

“I feel that many authorised taxi inspection stations are just doing a perfunctory check for the people they do bulk business for, which is mainly the managed cab depots – the guys who run about 30 or 40 taxis.”

Taxis found with tyres worn down to canvas

Qualified mechanic Ray Tabone independently tested Mr Hatrick’s claims, and says the car he had looked at should not be on the road.

“As it stands, the car is not roadworthy … we found on inspection that the two front tyres are worn on the shoulder to the point where the canvas is starting to come through. That should have been picked up,” he said.

What is more concerning is that Mr Tabone believes the car has been recently serviced.

“See how clean the oil is? [It] tells me it’s recently been serviced … those tyres should have been found and replaced at that time,” he said.

Mr Hatrick says he notified the taxi operator of the problems with the car but nothing was done.

He is not alone with his concerns. Another driver, who does not want to be named for fear of losing his job, has similar anxieties.

The man has been driving taxis for three years for a different operator. During that time he claims all the cars he had driven had serious mechanical problems.

“The suspension and the brakes are the two main issues on this car … they could be dangerous,” he said

“Nowadays anyone can jump in front of your cab without notice – it has happened so many times to me. If you do not have a proper brake and a sound car anything could happen.”

Mr Tabone says he has found a litany of defects, with the more serious ones putting lives at risk.

“The engine is loose … and could become a projectile in an accident,” he said.

“It’s broken. You can see the engine popping up … and a whole part of the suspension is missing.

“The vehicle has had some services recently. These items should have been picked up at that service.”

In between official checks, operators are expected to keep cabs in roadworthy condition. But with rising numbers on the road and soaring costs, there are concerns corners are being cut.

Kismet Taxis insists its cars are roadworthy and checked at government-certified mechanics.

It admits that economic pressures are causing serious problems in the taxi industry.

Kismet mechanic Leon Kalerandes says some operators are not always happy to get things fixed.

“Some operators are keen to get things fixed, other operators want to get things done on the cheap and get one specific problem and don’t worry about the other four things that are wrong,” he said.

Mr Kalerandes says he can feel confident about his company’s taxis but not about others on the road.

“You’ve got mechanics who are being paid by taxi owners to inspect their vehicles who have an extreme conflict of interest to basically assess the vehicle as safe if they want ongoing work,” he said.

The Minister for Transport declined an interview. Roads and Maritime Services (RMS) instead issued a statement saying it does conduct random spot checks.

It says it pulled over 7,500 cabs last year. A total of 557 were defective, mostly for issues such as faulty lights and indicators, body damage and dirt.

The spot checks do not cover key safety components, which the NRMA says is unacceptable.

“Obviously it’s important to have air-conditioning, but so is having brakes, so we want to make sure the on-the-spot inspections are looking at brakes and looking at safety elements,” NRMA spokesman Peter Khoury said.

“There’s a good, robust and indeed rigorous system in place to ensure that taxis are maintained to a good standard, in terms of not only mechanical requirements but also passenger comfort and safety standards,” he said.

Mr Hatrick says he would welcome a tougher regime of routine inspections.

“I’d like to see that checking put back in the hands of what was the RTA and what is now the Roads Maritime Services … because I think such checking could be done more objectively,” he said.

It is a view echoed by his union, who says that 22,000 drivers and their passengers and other road users are being put in danger.

“There are deaths and injuries on our roads involving taxi cabs, and the only thing that’s surprising is that there hasn’t been more,” Mr Aird said.

“It’s the responsibility of the Government to not wash their hands of the problem, to step in to say that we need appropriate standards in this industry for the community.”