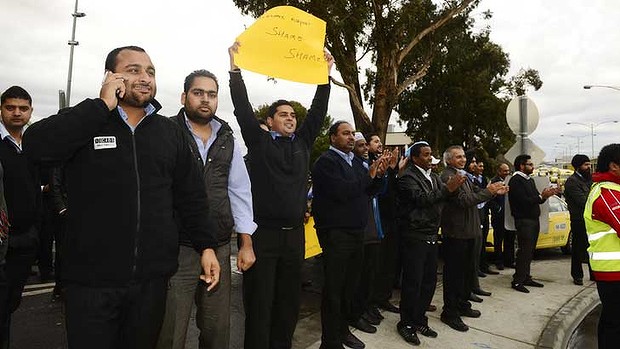 Angry taxi drivers say they will blockade Melbourne Airport every morning until a short fare system is reintroduced.

Drivers said they would rally each day from 8am to 10am, saying  airport management did not respect their work or rights to earn a fair wage.

The threat came after drivers picketed the taxi holding area at Melbourne Airport on Tuesday morning.

Nazar Yousef told drivers they should refuse to enter Melrose Drive and the holding bay where drivers enter the taxi queuing system during the protests from Wednesday.

By doing this during the protest times they would cost the airport management $2 for each taxi that proceeded straight to the ranks, he said.

Normally, joining the taxi rank straight from the freeway incurs a fine of $170 but on Tuesday security was directing drivers not in the protest straight to the rank.

However, during Tuesday’s blockade of the holding area, some drivers were still picking up passengers.

Melbourne Airport spokeswoman Anna Gillet said that despite the blockade, some cabs were still picking up passengers.

In addition, Skybus was putting on extra services to meet the demand, she said.

The blockade is causing disruptions for passengers, with one airport visitor saying the airport was in chaos.

Wayne Sievers was dropping a friend at the airport when he encountered the blockade.

“The blockade caused massive traffic chaos in and around the side access roads, such as the roundabout near the Australian Customs Service building,” he said.

“This took 30 minutes to 40 minutes to get through, and very nearly resulted in my friend missing her flight.

“We were both very angry and think something has to be done to stop taxi drivers from holding the travelling public hostage.”

Tuesday morning’s picket was the latest episode in the dispute over short-fare trips from the airport and follows a partial blockade of cabs at the airport in May.

Taxi drivers had planned two protests for Tuesday, the first at 8am, and the second at 6pm.

“We request all the drivers to stand up for the justice (sic) and please do not show your backs this time,” the poster says.

The holding area is on Melrose Drive.

About 60 barricading drivers tried to entice other drivers to abandon fares at the airport.

Airport management and a small police contingent were on hand as management redirected drivers out of the taxi holding areas straight to taxi ranks and waiting passengers.

At least one in five drivers directed to the ranks performed U-turns at the roundabout near the blockade, refusing to break the blockade.

Taxi drivers said discussions with management had broken down.

At least one of the holding bays was still operating normally, but around 9.30am drivers were directing their attention to boom gates near the arrivals area.

Until then taxis had been moving freely.

Driver Mohammed Ahmed said drivers had suggested to airport management that a token and boom gate system would work but this had been rejected at a meeting last week.

“They said the proposal was the same and this proposal is not working,” Mr Ahmed said.

Melbourne Airport spokeswoman Anna Gillett said discussions were continuing with the taxi driver representatives and the Victorian Taxi Association. She said the airport did not want a system that was open to rorting.

A related issue to the action is the Victorian Government’s recent reforms to the taxi industry.

Harry Katsiabanis, from private cab company Taxi Link, said taxi licences — until recently worth $525,000 — were now being given a nil value by banks.

“This was a problem that was flagged very early in the campaign,” Mr Katsiabanis said.

“We alerted the Government to it and the inquiry but obviously no-one has listened.”

Mr Katsiabanis said many taxi drivers had mortgaged their homes to pay for the licence.