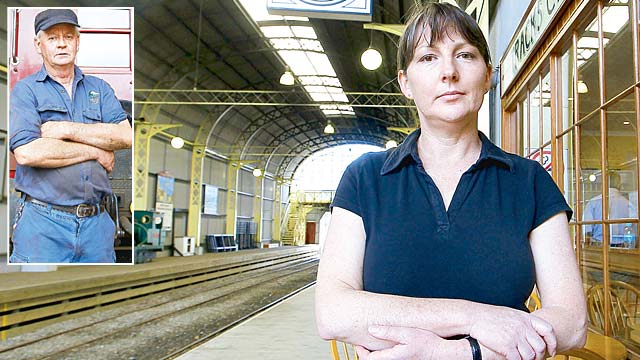 APRIL 13, 2013. The coal is shovelled into the firey furnace. The steam rises. The whistle blows for the final time. The brakes are released, and a train creaks along the long and winding track, slowly at first before building momentum. This is the last journey of the Abt Railway.

The story of the pioneers who built the original track more than 100 years ago will only be told in history books.

It’s a $35 million investment in regional tourism that’s run out of steam. Fallen off the tracks. Lost its puff. Been derailed.

It’s predicted the already fragile railway infrastructure will fall into ruin in no time.

Left unmanaged, the 35km track will give in to slippage and rot, and troublesome weed will overtake the rail corridor, threatening the pristine wilderness it intersects.

The best case scenario, says Tourism Industry Council Tasmania chairman Simon Currant, is a short-term shutdown until October so that long overdue repairs can be done.

But that’s only if someone coughs up the $5.8 million needed for upgrades.

It’s a big “if” and it doesn’t give much hope to the 48 people employed on the railway, from steam train drivers to office managers and tour guides.

There are also the businesses that will be indirectly affected. The hotels will have no tourists to stay in them. Coach companies will have no one to transfer. Coffee shops will have no diners.

Many staff at these businesses have already been put on notice and are looking for work elsewhere.

With them will go their families.

“Queenstown will become nothing more than a drive-in, drive-out mining town if this continues,” one local lamented.

The community has forged an identity on the success of the railway attraction in recent years.

A Queenstown without the railway is like a Port Arthur without an historic site.

There’s been much debate this week about the importance of regional tourism to the state economy and outright criticism of Premier Lara Giddings and Tourism Minister Scott Bacon.

They took centre stage as accolades from Lonely Planet and Trip Adviser rolled in last year on the back of MONA’s impact in the national market.

They were patting themselves on the back when Tiger Airways returned to Tasmanian skies and Qantas and Virgin increased flights.

But at a crisis community meeting in Queenstown there were calls for Ms Giddings to make an appearance, and Mr Bacon found himself defending slashes to tourism marketing in past budgets.

After the meeting, it was Infrastructure Minister David O’Byrne who fronted waiting media as Mr Bacon drove past the throng in his chauffeur-driven car.

But locals and tourism groups were asking how long the State Government could lean on the likes of MONA.

Mr Bacon told the Mercury he was committed to “supporting the regional tourism sector”.

“This financial year, we’re spending more than $10 million marketing Tasmania as a world-class destination to potential visitors interstate and overseas, with an additional $1 million for marketing activities announced towards the end of last year,” he said.

“[Tourism Tasmania] are also promoting the West Coast’s tourism industry through funding to the Cradle Coast Authority for co-operative marketing activities with local operators to promote the area’s tourism activities and experiences, and stimulate the bookings.”

But there is little sign of stimulated bookings in Queenstown.

West Coaster Hotel owner Brett Cannon said the railway’s uncertain future was already having an impact on businesses in the area.

He put renovation work on hold after taking a $16,000 hit in bookings and cancellations in just four days after news of the railway’s closure.

Debate rages about who should take responsibility for the $5.8 million repair bill — the State Government or gambling and tourism juggernaut the Federal Group, which had a 20-year government lease to run it.

But pointing the finger after the event won’t help.

The Federal Group has wiped its hands of the venture and was given approval to do so.

The struggle now is to find the cash to fix the railway and a new operator to run the attraction.

The tourism council wants the Federal Government to put up $5.8 million to repair the track, with the State Government to fund operating costs and losses for two years while it tries to secure a long-term operator.

The Abt Railway may once again disappear into the ancient forests of the West Coast.

• Carved into the harsh landscape more than 100 years ago, the original track quickly succumbs to the rugged wilderness when it closes in 1963.

• It costs more than $35 million to restore the railway in the late 1990s, with contributions from Federal and State Governments and private developer Roger Smith.

• In 2001 the partly completed Abt Railway opens as a tourist attraction, but trains suffer several derailments. The full 35km line is completed in August 2002 with funds from the State Government. It crosses 40 bridges, wild rivers and climbs over 200 metres on its journey from Queenstown to Strahan.

• The Tourism and Transport Forum says the attraction increases the amount of time people spend in the region from an average of 1.3 to 1.8 nights per person.

• Two of the original five Abt locomotives that operate on the railway are believed to be the oldest, fully restored working locomotives in the world.