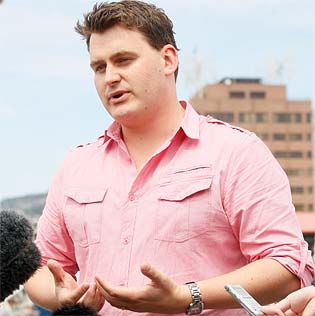 A REPORT confirms what many locals suspect — Hobart is the place to be in summer.

And tourists are not afraid to pay top dollar to stay in the state’s capital.

The Australian Tourism and Transport Forum and Host Plus National Accommodation Barometer report has revealed Hobart had the highest average occupancy rates and the average room price of all Australian capital cities.

“There is a buzz about Hobart right now. These results show not only are we leading the country but streets ahead of the national average,” Mr Martin said.

“We know Hobart had been exceptionally busy over the summer months but this has broken all the records.”

Mr Martin said the results for Hobart were outstanding, especially when compared with results just a few years ago.

But he said further investment in accommodation was needed to meet demand particularly four-star-plus rooms.

He said although Hobart was often full to the brim in January, February and March, more work needed to be done to make Hobart a destination year-round.

“There is a momentum behind Hobart thanks to more seats and cheaper flights and MONA. We are close to capacity most nights over summer,” Mr Lister said.

“It is important for those of us in Hobart not to just rest on our laurels or we will be blown away the competition interstate and internationally is always growing.”

Although Hobart has been booming, Mr Martin said the state was a two-speed tourism market and some regional areas had suffered badly in the past two or three years.

Launceston had enjoyed some steady growth but not at the same rate as Hobart.

“Hobart is a vibrant, hip place now and it’s an incredibly exciting opportunity we need to seize,” he said.

A new project by Tourism Tasmania is under way to help build up some of the more remote parts of Tasmania.

A group of Tasmanian tourism heavyweights will be involved in exploring opportunities for new ventures in World Heritiage areas.