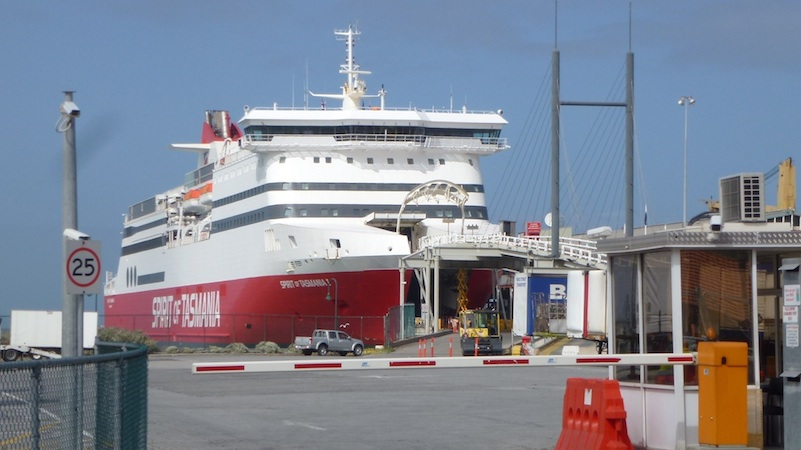 Passenger fares are not available to tourists on the Spirit of Tasmania website.

The company at the centre of a dispute delaying freight on the Spirit of Tasmania ferry is seeking an injunction against protesters, as the bill from the dispute mounts.

Qube is headed by the former managing director of Patrick Corporation, Chris Corrigan, who played a major role in the 1998 Australian waterfront dispute.

Earlier today, a picket line disrupted the unloading of freight at Port Melbourne for a third day.

Qube has urged unions to halt the action but the protesters have vowed to continue picketing at Station Pier this week.

They are angry about the sacking of a stevedore and the company’s review of three other positions.

They say the worker was sacked after raising safety concerns.

Ferry operator TT-Line has advised that no freight will be loaded for the return sailing tonight.

The company made the decision earlier today because of the ongoing disruption.

A spokesman says the freight yard was cleared this morning because it could not guarantee exporters there would be no further disruptions.

Tasmanian farmers are facing multi-million dollar losses if dispute is not resolved soon.

About 20 per cent of the state’s container and trailer freight is carried by the state-owned TT-Line on its Bass Strait ferries.

“When we found out today there’ll be no produce shipped today that’s when we’ve really started counting risk and we’re looking at millions of dollars potentially if this doesn’t sort itself out very very quickly,” she said.

Photo: Matt Berry from seafood freighter TasTrans stands next to a shipment of frozen squid which has been caught up in the delay. (ABC: Brad Markham)

She says fresh food must be moved quickly.

“It’s got very, very short shelf life and it’s very fragile. If we can’t get it moved to our markets as quickly as possible it becomes unsaleable.”

Hobart fish retailer, Ann-Marie Johnson, says produce which was due in Hobart on Saturday morning did not arrive until today.

“When we’re open to the variables of the weather we can deal with that, we can work with that.”

“We can’t work with these sorts of issues that stop supply, so we can’t get our produce across in good time to be able to sell it,” she said.

The Chamber of Commerce and Industry’s Michael Bayley says the blockade is having a staggering effect on other Tasmanian businesses.

“We just hope that our customers can work with us and work through whatever happens in the next week.”

Workplace Relations Minister David O’Byrne says the Government has been trying to resolve the dispute.

“We’ve been in discussions with Qube and the MUA over the weekend to try and work through this issue,” he said.

“There’s a meeting again this morning with Qube to try and resolve the issue. It’s a frustrating situation because we don’t have a direct play into those negotiations.”

But Opposition leader Will Hodgman says the Government is not doing enough to help solve the freight problem.

“We want to see some strong action,” he said.

“It’s his job to stand up for Tasmanian business, not concern himself with upsetting union mates because frankly Tasmania’s economy cannot afford any further damage.”

The second Spirit ferry is in dry dock.