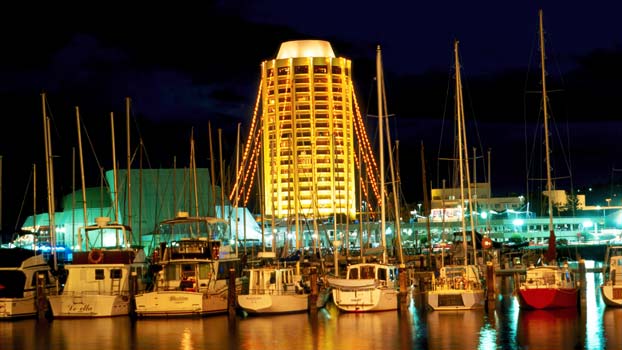 TTN 1st August 2014: Hobart’s Wrest Point casino has been $22 750 for faulty poker machines – a fine that was only made apparent to the general public in Tasmaian’s Liquor and Gaming review. NSW, which is home to over half of Australia’s poker machines, has no such ongoing review.

Below the Hobart Mercury’s report on the fines is a short profile of Wrest Point’s owners and an SBS ‘Fact Box’ on poker machines in Australia.

Wrest Point has been fined $9750 for “allowing a gaming machine to be played while it did not function in a manner in which it was designed or programmed to function”.

The casino was also fined $13,000 for allowing two gaming machines to be played “that were not operating in accordance” to approved rules.

Wrest Point and the Tasmanian Gaming Commission would not explain exactly what was wrong with the machines when contacted by the Mercury yesterday.

Federal Group spokesman Daniel Hanna said the impact on patrons was minimal. “However, Wrest Point and the Federal Group accept responsibility for the incidents,” he said.

“These incidents have highlighted the need to introduce stronger levels of staff training, operational procedures and internal auditing.

“We have since made these changes and expect Wrest Point to return to its historically very high levels of compliance.”

The fines were outlined in the Tasmanian Treasury’s latest Liquor and Gaming review.

A Government spokesman said yesterday the machines were detected by Liquor and Gaming compliance inspectors in February 2014.

“The machines were immediately disabled,” the spokesman said.

“There was no loss to players due to the mis-configuration.”

The fines come as fewer problem gamblers excluded themselves from pokies venues, prompted a warning from welfare agency Anglicare.

The number has dropped by 13.6 per cent in three years.

With new statistics on gaming machine expenditure due out in the next few days, Treasury figures show the number of Tasmanians placing themselves on the state’s self-exclusion register has fallen from 389 in 2012 to 336 on May 31.

Anglicare’s Michael Voumard, who manages problem gambler support services, said: “We are concerned to hear that the numbers are down.

“We tell our clients that self exclusion is important to keep themselves from problem gambling.

“We do hear from clients, at times, that say they sometimes do not get picked up.”

Mr Voumard said there are an estimated 3000 adult problem gamblers in Tasmania.

The Wrest Point Casino in Hobart.

Greg Farrell snr made his first fortune in transport and logistics company IPEC. In 1973, he converted the Wrest Point Riviera Hotel into Australia’s first legal casino after acquiring the property in 1969.

Greg Farrell jnr is managing director of the Federal Group.

On July 12, it was reported that the Federal Group was in talks to sell four of its smaller tourist sites to the Royal Automobile Club of Tasmania.

Details of a possible sale were not disclosed but a spokesman for the group suggested the family planned to focus more on its bigger assets, such as the casino in Hobart.

Factbox: Pokies around the world

Some countries have a ban on pokies, other regulate them carefully, and others not at all. Here is an overview of where Australia stands.

In the US, they’re called slot machines, in the UK; fruit machines and in Australia, they go by ‘pokies’.

And just like the name, countries around the world have varied approaches to regulating electronic gambling machines. They are the subject of fierce political and social debate in Australia.

A common form of regulation is controlling the machines’ return rate – or the number of wins per 100 spins it must award the gambler.

In Australia, laws regulating the use of gaming machines differ in each state, but it is the only nation to have a universally-agreed definition of ‘problem gambling’ based on research and not psychological diagnostics.

Pokies garner by far the highest revenue of all betting activities (horse and dog racing, table games and others), according to the Australian Bureau of Statistics’ figures.

Independent MP Andrew Wilkie offered his support for the Labor government in return for a federal law that would cap the amount gamblers can spend using mandatory commitment technology. However, the government backed out of its promise to honour Wilkie’s demands.

There is at least one casino in each major city. In 1956, New South Wales was first to legalise gaming machines for all registered clubs and pubs.

There are nearly 200,000 machines in Australia, and 100,308 of these are in NSW. The national figure is five times that of the US and represents around 20 per cent of all gaming machines in the world.

Revenue from gaming machines in pubs and clubs accounted for more than half of the gambling revenue collected by state governments in 2002-3.

In NSW and Victoria the mandatory return rate for machines in pubs and clubs in 87 per cent, and that applies to those in Melbourne’s Crown Casino too.

In Queensland, the return rate is 85 per cent in pubs and clubs, while casino machines must have a rate of 90 per cent.

Machines that accept $100 notes were banned in December 2007, except for in Crown Casino, where VIP members may still use them.

Machines with an automatic play button (that continued betting without any action from the gambler) were also banned.

All gaming machines in Victoria have an information screen showing return to player percentage and the odds of winning.

Machines in pubs are limited to paying out a maximum of $10,000 for a win.

In Western Australia, gaming machines are banned everywhere except in Burswood casino.

Since 1991, pokies operated by charitable foundations have been placed in hotels and bars. Maximum jackpots are regulated, with turnover decreasing by 9 per cent between 2004-8 and a further 5 per cent by 2009.

Pokies still accounted for 46.1per cent of gambling losses in 2008. The number of pokies in NZ is decreasing.

All machines must have Player Information Displays telling the gambler how long they have been playing, how much they have lost, and encouraging them to take breaks.

The UK divides slot machines – known colloquially as ‘fruit machines’ – into eight categories with differing limits on the amount of money that can be gambled and the amount the machine can pay out.

Category A machines – which have no limit on either spending or payout – are currently illegal.

Category B machines are divided into five sub-categories.

Slot machines are highly regulated by state governments in the US, with the exception of Nevada, which is a hub for gamblers visiting Las Vegas.

In New Jersey, gaming machines are only allowed in hotel casinos in Atlantic City.

In Illinois, Indiana, Louisiana and Missouri the machines are allowed only on licensed riverboats or permanently-anchored barges.

Mississippi removed a requirement that casinos operate only on barges after Hurricane Katrina, in order to recuperate its massive losses by stimulating tourism.

Wisconsin bars and taverns are allowed to have up to five machines, and players can choose between taking a payout, or gambling it on a double-or-nothing “side game”.

Slot machines are banned on Native American reservations unless the tribe first reaches a pact with the state entitling the state to receive a fraction of the gross revenue from the machines.

A rapid increase in gaming machines caused severe social problems in Russia in the first decade of the 21st century, with psychiatric reports estimating that 1.5 million people in Moscow gambled regularly.

The state was not collecting taxes from gambling activity, creating economic pressure as well.

In 2007, gambling of any kind was banned in all but four regions of Russia from 2007, with an amnesty period for existing establishments ending in 2009.

Owners of gambling premises with slot machines are obliged to secure the safety of gamblers and the machines must pay out not less than 90 per cent of all takings.

There are restrictions on the net assets gambling operators may own.

Gambling is a criminal offence in Japan, but a game called ‘pachinko’ – like a form of pinball – provides a loophole and works the same way as poker machines.

Gamblers put money into the pinball machines, and if the player’s ball falls into a certain hole the slot machine is activated and a jackpot may be made.

Since gambling is illegal, there can be no payout in the pachinko parlour, but players are rewarded with balls that can be converted into prizes of at a booth in the parlour.

The most popular prizes are slits of gold encased in plastic, which can be ‘sold’ at a neighbouring shop – usually also owned by the parlour – for cash.

Gambling tourism makes up about 50 per cent of the economy, with visitors mainly Chinese nationals from the mainland and Hong Kong.

All kinds of gambling are legal in Macau’s 33 casinos, including slot machines.

They operate under a common set of rule relating to tax and criminal law, but there is no set minimum percentage of return, no licensing system for vendors, no fines for breaching gaming laws and no legal framework to address problem gambling. However, vendors are charged a tax premium for slot machines in their establishments.

Legislation to be enacted in March 2012 plans to remove slot machine parlours from residential areas.

Macau overtook the Las Vegas Strip in gaming revenues in 2007 after gambling licenses were opened up to foreign operators – notably from Las Vegas and Australia.

Slot machines were banned in France until 1988, but are now legal. A state-owned body called Française des Jeux is responsible for regulating betting games and lotteries. France has 160 licensed casinos.

Norway banned all slot machines in 2007 and had them removed immediately from gaming premises.

A study conducted on their effect showed that 80 per cent of users were problem gamblers, and there was a considerable over-representation of men among them. The study also found that slot machines were the predominant type of gambling in the year prior to the ban.

Slot machines have been banned in many local authority areas including Dublin City, which outlawed them in 1987.

However, dozens of private members’ clubs offering similar games operate around the country.

In 2011, the Minister for Justice was considering a proposal to legalise more gambling activities in order to stimulate the country’s faltering economy.