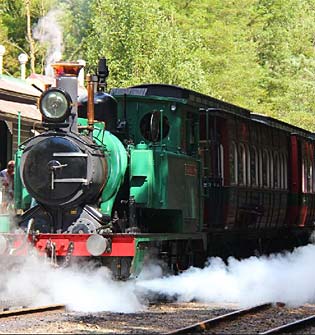 JOB security has been preserved for most of the workers on the besieged West Coast Wilderness Railway.

The Abt railway employs 44 workers, so the remaining 15 staff will leave at the end of next month when the Federal Group pulls out.

Mr O’Byrne said some redundancy packages would be offered to a small number of the leaving staff, but most of them were either seasonal or casual.

The jobs announcement follows an agreement between the Government and the Federal Group to transfer Federal employees to the Abt Railway Corporation.

The government corporation will employ the workers while a new operator is sought.

“The Tasmanian Government is committed to seeing the West Coast Wilderness Railway operating in the next summer tourist season,” Mr O’Byrne said.

The news was welcomed by Abt workers and West Coast Mayor Darryl Gerrity.

“This is great news — those workers are critical to the whole operation because they have so much expertise,” Cr Gerrity said.

He said workers had been “in limbo” regarding their future and any job losses would have been a major blow for the West Coast.

Abt train driver Bob Lusted said he was elated he had retained his job but felt sorry for those who would have to go.

“I’m lucky I’ve got a job but other people might be feeling differently right now,” Mr Lusted said.

He said the railway had been doing bumper business since the announcement last month it might close.

“It’s been full, just like when it first opened,” he said.

Cr Gerrity agreed there had been a rush of bookings in recent weeks from people worried it might be their last chance to ride on the railway.

The Federal Group announced on February 4 it would stop operating the railway on April 30 after 10 years but the Federal Government stepped in with a $6 million rescue package.

The State Government will call for expressions of interest in the search for a new operator after Easter but Mr O’Byrne yesterday said that “informal discussions” were already under way.

“While the certainty for staff is welcome, the Government is dragging its heels on finding a new operator,” he said.

“The Government should have started the hunt for a new operator months ago.”