Take your $8.15b and keep walking, Fungy 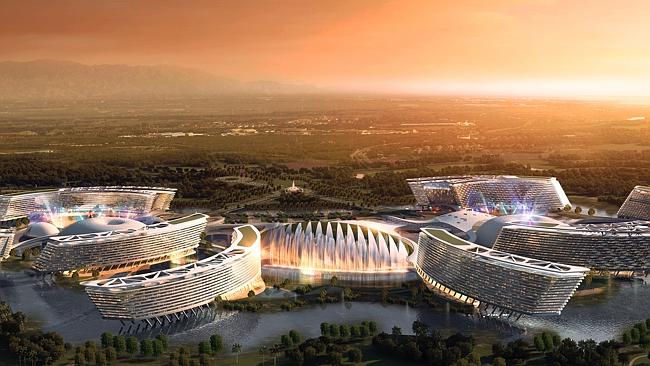 TTN: Chinese billionaire Tony Fung has threatened to walk over his $8.15b Great Barrier Reef casino project. As 2014 draws to a close, Fung has become stuck in final-stage probity checks that include reviews of his company’s fin­ancial capacity, business ability, reputation and criminal history. Hong Kong based Billionaire, Tony Fung on board his AQUIS corporate Boeing 757 jet in Cairns to fly to Macau. Picture: Marc McCormack

HONG KONG billionaire Tony Fung is threatening to axe his proposed $8.15 billion Aquis integrated resort at Yorkeys Knob unless his takeover bid for the Reef Hotel Casino is completed by the end of the year.

In a brief statement an Aquis spokesman said the group would “need to seriously reconsider any further investment in Aquis if the Reef acquisition was not able to be finalised in time to allow it to be listed on the Hong Kong Stock Exchange in 2016.”

The spokesman would not elaborate.

Mr Fung needs to operate the Cairns casino for 12 months before a combined Reef and Aquis entity can be floated to raise capital for the cane fields project.

It is understood he is getting increasingly frustrated with the delays in probity investigations.

TYCOON ENCOURAGED BY INTEREST IN AQUIS

Last night an Office of ­Liquor and Gaming Regulation spokeswoman said it “is not possible to accurately place a time frame on a probity investigation as they vary significantly based on the circumstances of the applicant”. “However, OLGR continues to work with Aquis to bring these investigations to a conclusion.’’

The spokeswoman said the government “insists in the highest standards of integrity in relation to the operation of casinos” to ensure necessary investigations were undertaken to satisfy the Governor in Council of the suitability of the applicant, and its associates, to be connected with the ownership of a hotel casino complex.

“Such probity investigations include a review of fin­ancial capacity, business ability, reputation and criminal history.” Aquis does not believe there will be a problem reaching the required 90 per cent acceptance level of Reef unit holders with the only condition standing in the way of the $276 million takeover being probity.

Last week Mr Fung extended a deadline to finalise acceptances from November 21 to November 28 to allow more time for casino shareholders to respond and for probity processes to be completed. He warned that he probably would not extend the November 28 deadline.

Mr Fung said “in our view the extension provides ample opportunity for OLGR (Office of Liquor and Gaming Regulation) to complete their investigations and advise us of the outcome.”

Mr Fung said Aquis had received acceptances of more than 81 per cent and had ­obtained Foreign Investment Review Board and Australian Competition and Consumer Commission approvals. The Reef Casino in Cairns CBD.

The Reef Hotel Casino would allow Aquis to start operating a business in Cairns five years before the completion of the new resort, Mr Fung said.

“If we are successful in ­acquiring the Reef Hotel Casino we can start working immediately to attract visitors from Asia and develop our business,’’ he said. “From a business perspective, it would be impossible to start from scratch.’’

Mr Fung has spent $30m on the Aquis project, including about $5m on an environmental-impact statement.

He has told The Cairns Post that he does not have “a bottomless pit”. Mr Fung has set high targets for the Reef casino. In the next three years he wants before-tax profits to soar from $20m a year to $100m.

He said the Fung family’s investment in Aquis and the CBD property would be $190m, including $30m on Aquis plus setting aside up to $40m for a makeover of the Reef casino.

The offices of Deputy Premier Jeff Seeney and Attorney-General Jarrod Bleijie were asked about the delay and the Aquis project but ­deferred probity issues to the ­liquor and gaming office.