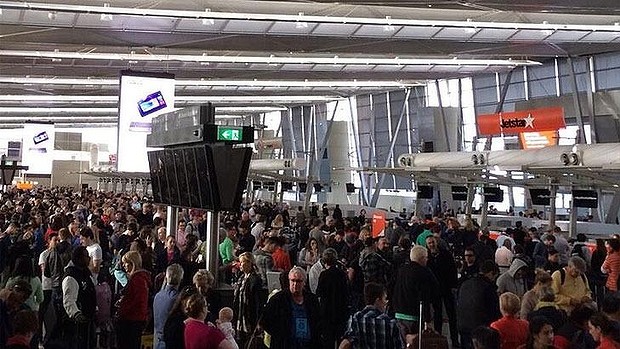 All flights through the T2 domestic terminal at Sydney airport are being affected by a power interruption, leaving crushing queues and thousands of delayed passengers.

A spokeswoman for Sydney Airport Corporation said there was a “power interruption” on Friday morning at the T2 domestic terminal, which services airlines including Virgin Australia, Jetstar and Rex.

The power outage means that baggage handling and check-in facilities are down. Passengers arriving for flights cannot be screened by security.

The outage is also affecting a number of aerobridge gangways between the terminal buildings and aircraft.

Qantas services from T3 Sydney domestic terminal are unaffected by the power outage at T2.

It is understood the outage started at about 8.30am. Staff working at the airport were told at about 9.30am that it would take two hours to restore power to the facilities.

Kane McChesney, a 19-year-old musician, and a fellow band member are travelling to Melbourne with Jetstar for a performance later this evening. He said he was pushed up against the end of the terminal as crowds continue to build, with little room to move.

“It’s packing in more by the second,” he said.

Mr McChesney said other members of the band had passed security earlier and were using facilities inside the terminal which have retained power. He said waiting passengers have been told for the past 45 minutes that the problem is “being fixed”.

“There’s a default message that keeps playing over the sound system that says they’ve found the source of the problem and are working on it.

“We’re just standing here with absolutely nothing to do at the moment.”

Jess Scully, who had been waiting in line for an hour and a half, said the delays “pretty much ruined my day.”

She was due to travel on the only direct flight to Launceston on Friday.

“[Virigin staff] don’t know what flights are leaving or if more flights are going to be put on.

Raquel Hamnett had already felt the impact of power problems leaving Phuket airport in Thailand on Wednesday night. Now she faces another major delay before she gets home to Noosa.

“We are just so tired, that’s why we’re lying all over the place,” she said.

“Now we are going to hit peak hour traffic in Brisbane.”

Crowds at Sydney Airport on Friday after a power outage. Photo: Helen Hayes