Struggling with the Australian identity 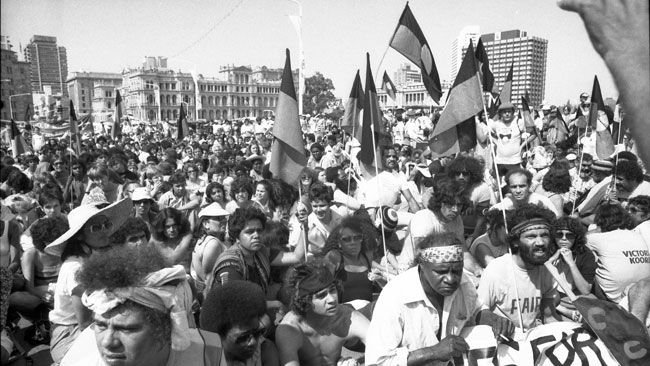 It means a lot of things to a lot of people but, for me, it wasn’t so long ago that Australia Day was that long week-end in the summer/wet season that you could slope off for a trip away in the sunshine to fish or fornicate, or an extra day to feed your burgeoning cricket or tennis habit.

All thoughts of “waving the flag” were considered smirk-worthy and to be seen openly celebrating ourselves was, frankly, un-Australian.

Then the Howard years settled over this wide brown land and your very average Australian suddenly found new value in a flawed and failed military campaign somewhere in Turkey where for months Aussie soldiers threw themselves at a cliff to prove they could be shot to bits and martyred with the best of them.

The Anzac spirit was remoulded after the mould had been scraped away.

Australia Day, too, had suddenly found new impetus and legions of proud Australians became somewhat over-proud and found comfort and clothing in a flag dominated by the crosses of another flag.

These flags became ubiquitous and filled the zeitgeist gap between the Chrissy fun of Christmas and the Crossy buns of Easter.

National pride became reduced to three simple words, “Oi”, “Oi” and “Oi”, which worked well in crowds, had just the right level of emotional depth and could be sung with that great Australian gusto.

In real terms, pride of country is not a bad thing in itself, if you could keep it under your Akubra and not let it bite anyone else.

But there’s a problem. January 26. The frivolity of the beach and cricket triumphs on Australia Day. Picture: Patrick Gorbunovs Source: The Australian

This was chosen to commemorate Captain Arthur Phillip’s arrival in “New South Wales” with a fleet of some of England’s finest scumbags and “scarlet women” in 1788.

They were there because the Thirteen Colonies of America had the temerity to tell Great Britain they weren’t so Great and please stop sending your convicts and tax agents.

Phillip had actually sunk anchor in Botany Bay on the 18th of January but found the place not as nice as Cook’s and Bank’s travel adviser reports, with the place sandy, swampy and full of “black and red ants of enormous size”.

More panic set in after spotting a hundred Frenchmen in two ships arriving six days later so he gathered up the fleet to Sydney Cove.

It’s important to note that the formal establishment of the Colony of New South Wales didn’t occur on the 26th of January. That happened on the 7th of February, when the formal proclamation of the colony and of Arthur Phillip’s governorship were read out to the gum trees in the strange new continent.

But it wasn’t new and strange to the Dutch (Captain Cook had identified it as the “east coast of New Holland” and our own Groote Eylandt and Arnhem Land were etched on contemporary maps), the Spanish, the Maccassans, the Portuguese, maybe even the Chinese or … especially, the hundreds of Aboriginal tribes across the continent who had lived there since … the day dot.

When Cook claimed Eastern Australia for Great Britain, he was overtly contravening orders from Admiralty, which stated he could only claim lands with the “consent of the natives”.

No worries, he simply blanked them out and on August 22, 1770, founded some very robust “terra nullius” for constitutional lawyers to chew over, then blank out on for the next 200 years.

No “native” was around that day to hear that they’d all been dispossessed by a pink demon.

So, Cook was a thief, a fraud and a liar. Not a good bloke to hang your three-pointed hat on. Another problem about January 26 is that Australia as we know it didn’t come into being until 131 years later, on January 1, 1901, when the six separate British self-governing colonies got scared of the Chinese menace and federated to become the Commonwealth of Australia.

The term “Australia” didn’t even come into common use until 1817.

So January 26 was wrong from the start but it’s now become lodged in the calendar like a divisive gallstone. Every year, it’s celebrated with ever increasing nationalistic evangelism, as the “sons and daughters of Cook” festoon themselves (and their utes, pants, babies, flesh etc.) in the stars and the crosses of this nation’s flag.

But for the indigenous people of Australia, it is the twisting of the knife in a very old wound, and more than anything signifies the conquest by fire and fever of their lands, and a bitter reminder of invasion, murder and injustice.

Why not? There’s already a day off then, so why not add on “anothery” on January 2 and the whole New Year’s festivities could extend to an extra day and night “to tie one on” for the country.

Every year, the debate will continue, with those in favour of retaining the 26th of January shouting down the objectors or, worse, ignoring them, just like Cook did in 1770, and in effect saying, “Who won the bloody war, then?” … and it was bloody.

So, before you stick that happy flappy flag to your car this year, have a good hard look at the Union Jack in the corner and think about what you’re buying into.

Mr Gilchrist, Australia Day won’t be Australia Day until we have the guts to face up, like a Pommy batsman against Mitchell Johnson, to our less than classy past and move it out of the January 26 timeslot and into a future we can all call home.

>> Todd Williams is a long-time Territorian resident and is a former Greens candidate.