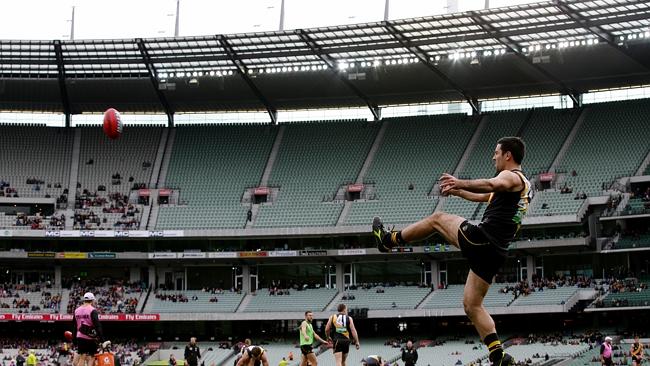 A Sunday Herald Sun analysis of games played in Melbourne up to Round 15 this year shows crowds are down by more than 11 per cent.

The biggest drop has been for games at Etihad stadium, with crowds falling nearly 13 per cent.

MCG crowds were also down almost 9 per cent.

Overall, about 310,000 fewer people had attended AFL games in Melbourne this year compared with last.

The AFL said the poor performance of big-drawing clubs including Richmond and Carlton had contributed to the drop-off.

He said AFL bosses were more interested in catering for corporate interests than the man in the outer.

“It is almost as though going into the stand is like walking into a move theatre,” he said.

AFL boss Gillon McLachlan this week announce the AFL would abandon its experiement with Sunday night games after just over 40,000 people turned out for the match between Collingwood and Carlton – the lowest crowd for a match between the sides since 1921.

“We have to decide as an industry if we want bums on seats or eyeballs on screens,’’ Mr Clarke said. “The networks love Sunday twilight but people don’t love it.”

Carlton club chiefs have added to the dissent saying its fans were not happy with the team’s three Sunday night fixtures.

“While you will never be completely satisfied with any fixture, we are hopeful that going forward we can strike a healthy balance of games in both traditional family friendly fixtures, as well as made-for-TV timeslots,’’ Mr McKay said.

League spokesman Patrick Keane admitted the scheduling trials of new timeslots had impacted Victorian crowds this year. He said the league still felt there was a place for Thursday night and it would be part of the next TV rights deal.

“We do believe that Thursday night matches can work going forward, on the response they have had this year, but the numbers and locations of those games is yet to be determined.”

But he added the poor form of Melbourne teams – Carlton, Essendon, St Kilda and Richmond – had impacted crowd figures in Victoria.

“That is not said to blame those clubs in any way, but it simply is a reality that lesser results for them on field have impacted attendance levels for them,’’ Mr Keane said.

He said the crowds for those teams were down 17 per cent, which accounted for the drop in numbers in Victoria.