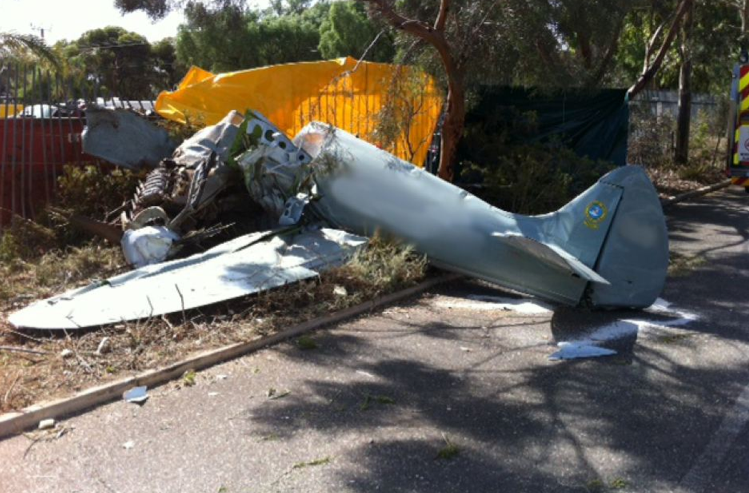 The wreckage of a replica Spitfire that crashed, killing pilot Roger Stokes.

Pilot error contributed to the fatal crash of a homemade replica Spitfire at an Adelaide air show in March last year, an investigation has found.

Veteran flyer Roger Stokes, 73, was killed when his kit-built plane crashed close to homes at Salisbury during a demonstration flight above nearby Parafield Airport.

The Australian Transport Safety Bureau (ATSB) has completed its investigation into the crash, finding the plane stalled before nosediving into the ground.

The bureau found Mr Stokes allowed the airspeed to drop during a final turn after coordinating a landing clearance with air traffic control.

“During the last pass of the replica Spitfire display, the pilot purposely slowed the aircraft, extended some wing flap, and lowered the landing gear as part of the demonstration,” the report found.

“This altered the aerodynamics relative to the previous passes in that the lower airspeed resulted in less airflow over the wings and consequently less lift.”

The bureau found the aircraft was prone to aerodynamically stalling and it was not fitted with a stall warning device.

It suggested Mr Stokes’ “stress level was higher than usual and this might have adversely affected his management of the non-routine circuit.”

The ATSB recommended pilots make sure they are aware of the added demands of air displays, which are different to normal flights.

“Pilots who participate in air displays should consider the demands involved and to the extent possible ensure that the complete sequence, including landing, is planned and rehearsed,” the report found.

About an hour before taking off, Mr Stokes had visited the control tower to get information on wind conditions.

He told air controllers he was aware of turbulence and “expressed concern about the crosswind for take-off and landing but advised air display personnel that he was happy to proceed with the flight as scheduled.”

Mr Stokes completed seven flyovers in about as many minutes before turning to land.

Several witnesses later reported that the plane was flying unusually slow at that point and then dived out of sight.

The wreckage was found in a factory car park about 1.5 kilometres north of the airfield and the investigation found “no evidence of in-flight structural failure” or “pre-impact damage.”

The ATSB said although amateur built aircraft in the experimental category are not required to have stall warning devices, pilots should consider them as a last line of defence.