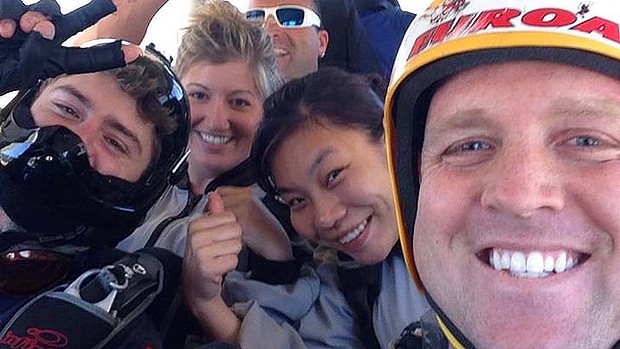 He had recently returned home after his third tour of duty in Afghanistan. Then he and his wife won a trip to Australia on The Ellen DeGeneres Show.

Life had been looking good for Gunnery Sergeant Brandon McGraw, 33, a US marine who was regularly spotted jogging around his neighbourhood or tinkering with his new Harley-Davidson.

“He was very friendly, open and a happy person,” neighbour William Sidberry told ABC News. “He loved the Marine Corps and what he was doing for the country.”

His final photo: Brandon McGraw about to skydive in Euroa on Saturday.

But his dream trip ended in disaster when he died on Saturday afternoon while skydiving with Victoria’s Euroa Skydive.

While his wife Cherilyn went tandem, it is believed that her husband, who was an experienced diver, jumped solo.

According to reports, while his parachute opened without problem, Sergeant McGraw suddenly swerved to the left and right before crashing to the ground. By the time paramedics arrived he was in cardiac arrest. He was pronounced dead at the scene.

On Thursday DeGeneres released a statement to US Weekly that said:  “I’ve been speaking with Cherilyn. And my staff has been in touch with her as well. She’s asked us to help keep this private as she tries to deal with this unimaginable tragedy. I hope everyone respects that.”

On their website Euroa Skydive says that in 30 years of business they have never had an accident.

“It’s tragic,” Mr Sidberry told the ABC. “Death is tragic either way but I don’t really have the words to express it. My feeling is if you make it home – I felt like it was safe after I made it home and I’m sure both of them felt the same way. We’ll miss him.”

Brandon McGraw arriving home at the start of November.

The first, accompanied by pictures of the pair in the plane, says: “My hero. My angel. These are truly such symbolic photos. He was happy and doing what he loved. It’s amazing all that photos can capture in a moments time. The last 2 photos taken. I love you more than anything in the world, honey. You are the most amazing man.”

The second message expresses her gratitude for people’s support:

“I just want to say that this stupid Facebook has been my saving grace this week. I’m beyond honoured and words will never be able to express my gratitude for all the love, support and prayers. You all have kept me SO strong. I am in mission mode to get us back to the USA. We cannot wait to get home. (I don’t know when we’ll be home and I won’t be sharing when We get home so please don’t ask.).”