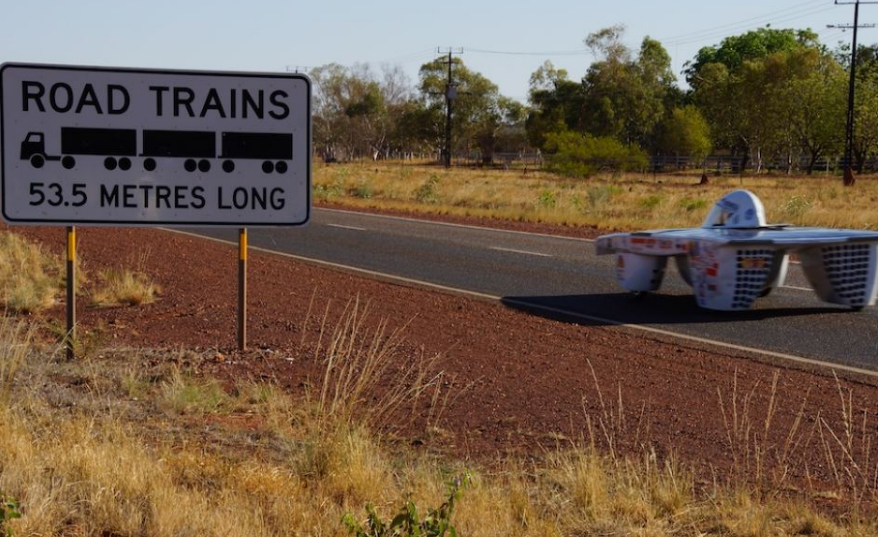 Cars in the World Solar Challenge are moving through Alice Springs in the Northern Territory at the half-way mark of the race but, despite one competitor being penalised for speeding, the pace of the event is slower than in previous years.

An extra wheel and other rule changes are behind the change.

Nuna, from the Netherlands, and Japan’s Tokai continued to lead the field through the Red Centre today.

Nuna had a strong lead throughout the race until last night, when it was caught speeding into Tennant Creek, and was given a ten-minute penalty.

The difference between the two leading teams remains a matter of minutes on the third day of the challenge.

In past events, the cars in the speedier Challenger Class used to run on three wheels, with drivers lying almost horizontal to improve aerodynamics.

But this year, with the field of almost 40 vehicles running on four wheels, drivers are positioned more upright, causing more wind resistance.

This, combined with the extra weight of the cars imposed by design rules, means that overall times in the 3,000 kilometre run are down.

Organisers are predicting that it may make a difference of 24 hours in the time taken to reach Adelaide, compared to past events.

Today’s 5:00pm ACST compulsory stop for most of the competitors is expected to be beside the Stuart Highway somewhere between Alice Springs and Coober Pedy in South Australia.

Dutch car Stella, in the cruiser class, is one of the ‘passenger-type’ vehicles that is keeping up with the leading pack.