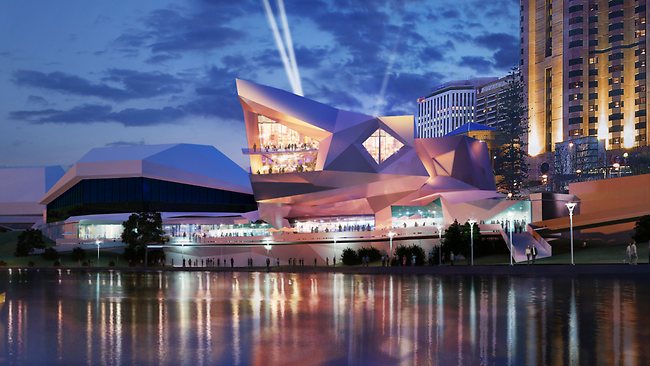 SKYCITY will be allowed to more than double the number of gaming tables at Adelaide Casino and install an extra 500 poker machines, in a deal that paves the way for a massive expansion.

Treasurer Jack Snelling will announce today that SkyCity Entertainment Group’s licence will be updated in an agreement that blocks rival casinos in Adelaide until 2035.

The State Government wants the casino to become a feature attraction of the new Riverbank precinct.

It will provide entertainment for up to 50,000 people expected to attend the new Adelaide Oval each weekend.

However, it is expected to provoke anger in the charity and social services sectors.In February, SkyCity revealed its vision for the casino, which included a hotel, VIP suites, restaurants, bars and a spa and rooftop pool.

It said the work would not require the removal of any part of the current heritage building.Mr Snelling said he was confident the proposed deal, which needs approval from the Independent Gambling Authority, struck the right balance.

“The negotiations have taken time but we have secured a win for South Australian taxpayers and increased measures to combat problem gambling,” he said.

The deal is forecast to return an extra $60 million to the state Budget over the coming four years, including a $20 million up-front payment.

in recent years, as sales and property incomes decline rapidly.

Last month, it sold the right to sell SA Lotteries products to Tatts for a $427 million jackpot.

Some will be reserved for “premium” areas to lure international and interstate high rollers.

Taxes on poker machines in the casino will be lifted from 34.4 to 41 per cent, and the charge on table games will rise from 0.9 to 3.4 per cent.

Mr Snelling said the deal also imposed “the strongest responsible gambling measures applied to any casino in Australia”. They include:

TECHNOLOGY to ensure poker machines are capable of pre-commitment, in line with Federal Government policy.

MACHINES with $5 maximum bets, which is lower than current settings but well above the $1 limit wanted by anti-problem gambling campaigners.

Those restrictions will be written into legislation when State Parliament returns next year.

It means the Liberals and minor parties may be able to push for different restrictions when the plan is brought forward.

Mr Snelling said the casino would have to buy pokies entitlements from the Approved Trading System, a trading network that is aimed at reducing overall poker machine numbers.

The system removes from the gaming sector one in every four machines sold by hotels.

However, those machines will be placed in “premium” gaming areas and the casino barred from selling them.

Mr Snelling said compliance would be overseen by the Independent Gambling Authority.