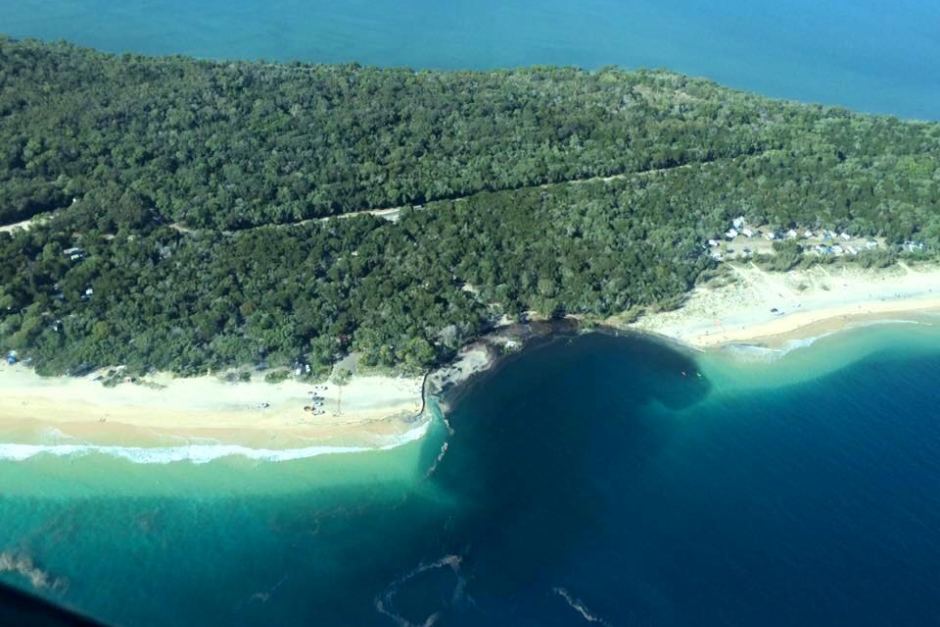 TTN: A tow truck provider near Rainbow Beach, Queensland has provided a blow-by-blow report of the day an enormous sinkhole opened up at Inskip Point, QLD. Fortunately no-one was hurt, but the hole is clearly much deeper than the 3 metres reported by the ABC.

The sinkhole, bigger than a football field and several metres deep, developed at Inskip Point around midnight (26th September 2015).

A car, caravan, a camper trailer and tents were swallowed almost immediately.

Holiday-maker Casey Hughes told ABC the sinkhole “sounded like a thunder noise” as it opened up.

Fellow camper Sylvia Murray said “it was amazing to see”.

“People were basically on the edge of it with their van, trying to madly get their vans out,” she said.

PHOTO: Vehicles, including a caravan, have been swallowed by a giant sinkhole at a beachside campsite on Queensland’s coast overnight. (ABC News: Leonie Mellor)

One woman ran screaming through nearby campsites banging on caravans and yelling for people to get out.

QPWS said 140 people had been evacuated from the site.

Police and SES crews were quickly on site, helping those in the immediate vicinity to leave.

Gympie Mayor Mick Curran said the sinkhole near Fraser Island did not pose a threat to holiday-makers.

“Certainly being the school holidays at the moment there’s quite a number of campers at Inskip,” he said.

“Thankfully at this stage, everyone has been accounted for and there’s been no reported injuries.”

Senior ranger Dan Clifton said there is a possibility the sinkhole could get bigger.

“There is a real possibility the hole could expand with ocean currents, so people are urged to avoid the area,” Mr Clifton said.

“Rangers and police have erected traffic barriers and warnings signs to advise beachgoers of potential risks.

One man said he had been fishing with another man on the beach when they heard a commotion and looked around to see the ground opening up.

He said the second man raced back to his campsite as he saw his car and caravan going under.

PHOTO: A man raced back to his campsite as he saw his car and caravan going under. (ABC News: Leonie Mellor)

SES volunteer Mark Lawler said other vehicles blocked by trees were expected to go under throughout the night.

Many campers took the opportunity to leave immediately, driving into Rainbow Beach and setting up a temporary camp in one of the parks.

The company said two of their employees, who were camping 200 metres from the beach, were caught up in the mayhem.

They were quickly evacuated after they “heard a noise like a storm” and “realised the sand was rapidly disappearing into the ocean at a amazing speed”.

QPWS said they will continue to monitor the situation and will approach geotechnical engineers to provide an assessment of the site.

Major sinkhole has occurred at the Inskip Point Camp Grounds. (Near Rainbow Beach) Appears no injuries with property being lost into sink hole. Large evacuation of holiday filled camp grounds occurring.
Update. Two Claytons employees and friends were on holidays in a group in the middle of the mayhem. They had camped approx 200 metres from the beach next to the boundary fence of the campsite and heard a noise like a storm. On looking they realised the sand was rapidly disappearing into the ocean at an amazing speed. They only just got their 4wds and caravans out with seconds to spare as their campsite disappeared 3 metres down into the ocean. A 4wd, large caravan , camper trailer, tents etc on the site next to them all got swallowed into the ocean.