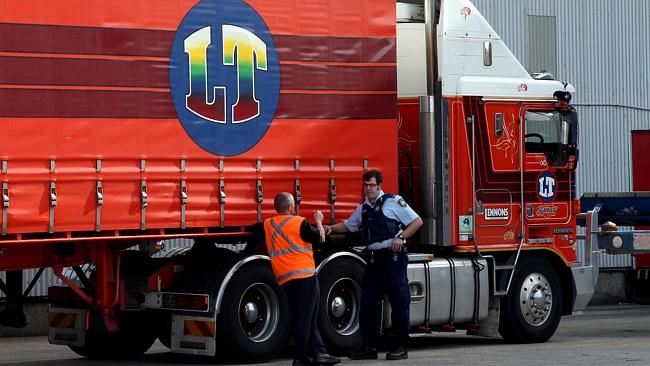 THE employer of a methadone-affected truck driver who killed a family of three in Sydney’s southwest has been slapped with one of the biggest fines in Australian transport history.

Calvyn Logan and his 81-year-old parents Donald and Patricia were killed when a drug-affected, sleep-deprived truck driver slammed his B-double into their sedan in January 2012.

Vincent Samuel George was found guilty earlier this year of three counts of manslaughter following the triple fatality on a southwest Sydney highway.

George was driving for company Zaens Pty Ltd, which trades as Lennons Transport.

Blood samples revealed the 34-year-old had methadone in his system when he veered onto the wrong side of the Hume Highway near Menangle and crashed into the Logans’ car.

The trucking company and director Anthony Lennon were charged over almost 200 speeding offences committed between February 2011 and March 2012.

After pleading guilty, Zaens and Lennon were today ordered to pay the more than $1.3 million fine in the Downing Centre Local Court.

In her judgment, she said Lennon admitted drivers did not always tell the company about their speeding offences.

“That is not surprising,” she wrote.

Roads Minister Duncan Gay said the penalty was the biggest in NSW history against a trucking company under Chain of Responsibility legislation.

“This is a terrible tragedy, there are no winners here, but I hope this decision by the court today brings some small comfort to the Logan family after their tragic loss,” Mr Gay said.

George will be sentenced in September.