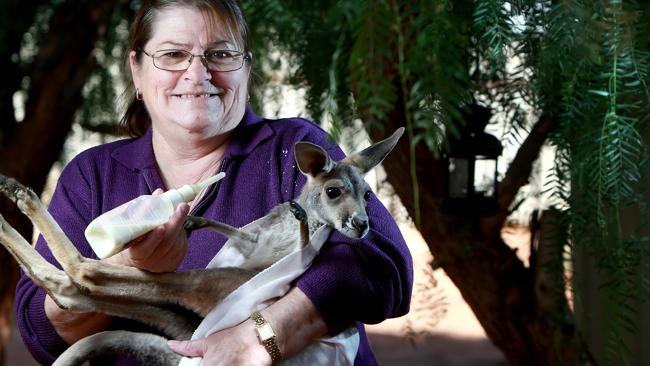 A SET of shark teeth has sparked a dispute between a Coober Pedy art gallery and the State Government that could see tourism operators across South Australia dubbed outlaws.

Josephine and Terry Brennan-Kuss, operators of Josephine’s Gallery and Kangaroo Orphanage at Coober Pedy, have filed action in the Full Court of the Supreme Court.

They are challenging 18-month, $100 good behaviour bonds imposed upon them for illegally selling “protected aquatic resources” – a set of great white shark jaws and teeth.

In court documents the couple say they have been unfairly prosecuted by the Department of Primary Industries and Resources’ fisheries division.

They say their case creates a precedent which threatens “the liberty” of every tourism operator, jeweller and vendor selling shark souvenirs – regardless of how old the bones are.

“The effect would be that all persons in possession of a great white shark’s teeth or jaws … would now be committing an offence,” they say.

“That would be inclusive of individuals with jewellery and tourism operators with sets of jaws and teeth … surely, this could not have been the intention of legislators.”

In July 2010, the couple were charged with breaching Section 72 of the Fisheries Management Act (2007).

Prosecutors claimed the shark’s teeth and jaw displayed in their gallery for sale were illegal to possess because they belonged to a protected species.

In their documents, the couple say the items were provided by Kym Hicks from kills he made in 1991 and 1993.

“At that time, Mr Hicks was the holder of a relevant fishing licence (and) sharks were not subject to protection under Commonwealth or State legislation,” they say.

“Sharks were not considered a protected species until January 1, 1998 … consequently, at the time of the taking of the sharks, no offence was committed.”

The couple say the Port Augusta Magistrates Court erred in its approach.

“The court should not have read into the law that an aquatic resource that had, at any time, come from state waters attracts criminal liability,” they say.

“This widens the potential operation of the section so as to place at risk the liberty of a class of people not otherwise at risk.”

In its response, the State Government says the law has been interpreted properly so as to discourage people from selling, owning or displaying “trophy items”.

It says it is impossible to forensically determine the age of shark teeth, and so the offence must be broad and far-reaching.

“The law creates a blanket prohibition (similar) to that in relation to the possession or sale of illicit substances and illegal weapons,” it says.

The case returns to court next month.