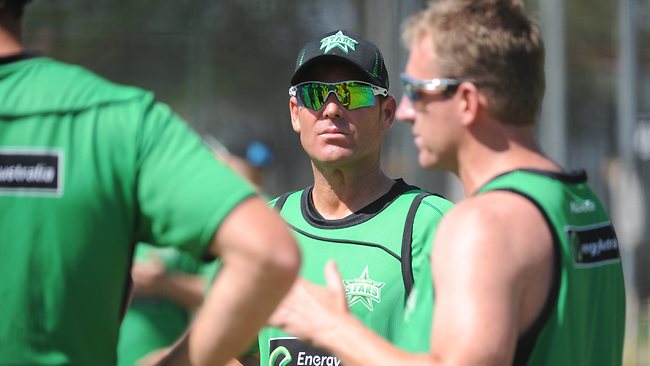 SPIN king Shane Warne has become the latest in a long line of cricket greats to blast Australia’s selection policies, labelling them “mind boggling” and “ridiculous”.

Warne lashed out at Cricket Australia’s refusal to allow recovering paceman James Pattinson to play for the Melbourne Stars in tomorrow’s night’s Big Bash semi-final against the Scorchers in Perth, yet he was cleared to play Victorian grade cricket last weekend.

Pattinson took 2-21 from eight overs for Dandenong against St Kilda on Saturday and was keen to play for the Stars as he continues his recovery from a side strain suffered during the Test series against South Africa in late November.

Warne added to the debate that has seen a host of former cricketers such as Brett Lee, Ian Chappell and Michael Slater take aim at John Inverarity and his selection panel’s controversial rotation policy.

“It’s just mind boggling how ridiculous that decision is and to me is not a selection or a cricket person’s decision.

“Anyone with half a brain or common sense will know that playing a semi-final against good opposition where you get four overs is actually better for you than playing eight overs of grade cricket and standing out there for seven hours. “I know there has been some injuries, but it looks like strength and conditioning are picking the team, not the selectors.

“To me, the captain should always pick the team, in conjunction (with) the selectors to try and get the best team out on the park for Australia.

“Playing cricket for Australia is something special. It’s not just rotate around and give a guy a game and see how you go.

“There’s nothing like knowing you’ve performed well enough that you’re going to play the next game. That’s when you start performing at your best.”

Warne also called for Australian players to “take ownership” of their spots in the team and demand not to be rotated or rested. Shane Warne could play his last game in Perth if the Melbourne Stars do not beat the Scorchers. Picture: Richard Polden Source: PerthNow

Warne even questioned why Scorchers opener Shaun Marsh – the leading runscorer in the Big Bash – was not playing for Australia.

“Guys like Shaun Marsh, how he’s not playing for Australia, is a joke,” Warne said.

“Yes, he got injured and yes, he didn’t do that well when he had his chance, but we all know he’s a good player.

“A sign of selecting a good team is knowing someone is a good player and sticking with them, even if they do have a bit of a rough trot at the start.

“I just think the Australian players in all forms need to put their hand up and say they want to play every game.

“If you get injured, so be it, but I just think they need to take a bit more ownership.”

Warne returns to the Stars line-up tomorrow night after a one-game ban for his foul-mouthed tirade with Melbourne Renegades batsman Marlon Samuels.

But the 43-year-old, who could be playing his last game of professional cricket, will not be miked up like he has been for most of the tournament.

A Stars spokeswoman said the decision was not related to Warne’s punishment for his attack on Samuels.