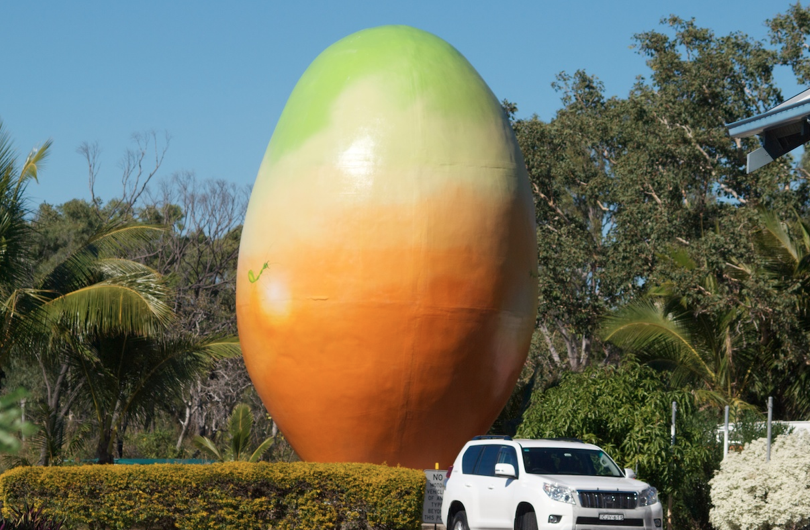 ABC and Fairfax journalists are trying to prove that the theft of Bowen’s Big Mango was a publicity stunt after police did not investigate the theft, then comical ‘CCTV footage’ and social media promotions began. A Sydney ad agency has associated themselves with the ‘operation’.

Staff at the Bowen Tourist Information Centre arrived at work on Monday morning to find the $90,000 Big Mango was not in its usual spot.

Bowen Tourism chairman Paul McLaughlin said it appeared the theft took place between midnight and 2am, with security footage showing at least six people in the area along with heavy equipment and cranes.

“It’s 10 metres high and weighs seven tonnes so it wouldn’t have been an easy thing to shift, but someone’s done a pretty good job of borrowing it,” he told Fairfax Media.

An officer at the Bowen Police Station told Fairfax Media they were not investigating the mango disappearance at this stage.

Mr McLaughlin said the police had been notified but a formal complaint was yet to be lodged.

A Bowen’s Big Mango page was created on Facebook on Monday morning.

The first post appeared about noon: “Bowen’s Big Mango is missing!!! Please share and help us find it!’’.

This was followed up with a series of posts including a press release, images of spot where the Big Mango stood, some “images from security cameras’’, and finally a video that shows a crane reversing into shot.

Guardian Australia has linked the media release to Banjo Advertising in Sydney, which did not deny it was a publicity stunt.

Earlier, Mr McLaughlin told Fairfax Media he was not angry about the disappearance of the giant fibreglass structure, although no-one had yet claimed responsibility for the theft.

“At the end of the day it’s a bloody big mango and I’m sure someone will see it and we’ll find it anyway,” he said.

“I think it’ll definitely turn up, no doubt about that. We’re not sure what has happened but I’m sure we’ll get it back.”

Bowen is the mango production capital of Australia and the Big Mango was erected in 2002 as a tourist attraction.

According to the Tourism Bowen website, the idea for the Big Mango was first suggested by a local councillor. The mango cost $90,000 to create, some $60,000 over budget.

Police yet to receive complaint about missing Big Mango

A BOWEN Police spokeswoman said they are not currently investigating the missing Big Mango.

But police are claiming no official complaints have been reported to them at this stage.

“We are not currently conducting an investigation,” she said.

Bowen Tourist Information Centre manager Christin Short arrived at work this morning to find the 10 tonne, $90,000 Big Mango tourist attraction had disappeared from the site where it has sat for more than a decade.

Ms Short immediately called Bowen Tourism Chairman, Paul McLaughlin, thinking it may have been moved for repairs. However, Mr McLaughlin said there had been no planned maintenance work for the popular tourist attraction.

Mr McLaughlin responded to the call and inspected the site to find the iconic fibreglass structure had indeed been unbolted and removed overnight.

It is unknown for what purpose the Big Mango was taken and no one has yet claimed responsibility.

Bowen is the mango producing capital of Australia and the Big Mango was erected in 2002 as a tourist attraction.