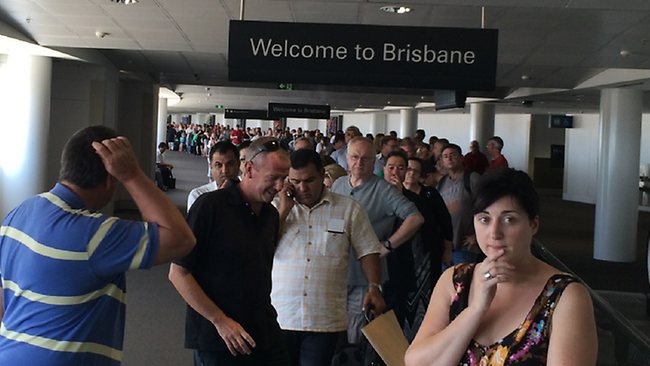 A PAIR of scissors has caused level three of the Brisbane International Airport to be evacuated.

Around 2000 passengers from three different international flights had to clear the area with the effects of the delay felt all the way back to Cairns.

An international flight bound for Hong Kong has had its Cairns stopover delayed by an hour.

More flights could feel the impact later in the day.

Several levels of security in Brisbane have identified the forbidden object as a pair of scissors. Passengers wait to be security screened again after a security breach at Brisbane International Airport.

A passenger caught up in the incident says people are waiting to go back through security now.

“All planes have been disembarked and no planes can land,” the passenger said.

“(The) departure lounge is in lockdown and evacuated, everyone from up there has come down a level and we are waiting while outgoing passengers that were boarded go through security again.”

“(The) head of security was dripping in sweat,” the passenger said.

A spokesperson for Brisbane Airport said all passengers present will now undergo screening.

“Obviously as a precaution and as normal procedure we’re rescreening passengers,” the spokesperson said.

“We apologise for any inconveniences and thank the passengers for their patience.”

The new security screenings could take more than an hour to complete.