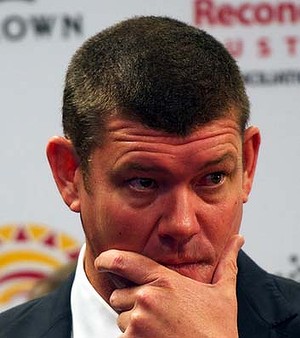 Labor is threatening to withdraw support for James Packer’s push for a second Sydney casino because of continuing government secrecy over key aspects of the proposal.

The threat comes as the Department of Premier and Cabinet applied extraordinary secrecy provisions to suppress key documents about the project and polling revealed more than half of NSW voters oppose a second casino.

The government is considering the proposal by Mr Packer’s company, Crown Ltd, to build a $1billion six-star hotel and casino complex at Barangaroo, Sydney’s premier harbourside redevelopment site. A panel chaired by former banker David Murray is considering the net benefit to the state.

But Premier Barry O’Farrell is refusing to release an independent report by the consultancy  Deloitte commissioned by his department to assess the potential economic benefits of the project, claiming it is a cabinet document.

Deloitte was asked to say whether the projected tourism benefits were achievable and whether the proposed VIP-only casino was needed to make the hotel financially viable, as claimed by Crown.

Labor’s planning spokesman Luke Foley said there was ‘‘no reason’’ the Deloitte report should not be publicly released.

‘‘While Labor has approached the Crown proposal with an open mind, ongoing secrecy on the part of the government will make it difficult for Labor to give the proposal bipartisan support in the Parliament,’’ he said.

Mr Foley said ‘‘the public interest is in favour of full disclosure’’. He called on the government to make publicly available full details of any gaming licence it might decide to issue to Mr Packer.

Mr O’Farrell has confirmed that if the government proceeds with Mr Packer’s proposal it will introduce legislation to grant Crown a gaming licence for a casino targeting Asian high rollers without poker machines.

If Labor withdrew its support, the government would require the support of the crossbench as the Greens oppose the project.

Mr O’Farrell’s spokesman said the appointment of Mr Murray, whose report would be released, should ‘‘give everyone confidence in the process and probity of the consideration of the Crown proposal’’.

The warning came as a Nielsen poll revealed the casino proposal had the support of only slightly more than one in three voters.

In the statewide poll of 1000 voters taken last weekend, of which Mr Foley was unaware, 56 per cent opposed it, 38 per cent supported it and 6 per cent were undecided.

And also from the smh.com.au