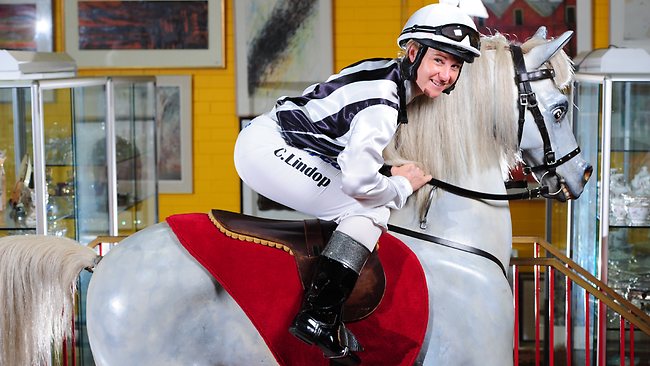 THE South Australian Jockey Club is reeling from the realisation it does not own the “one and only” Nimble, the Christmas Pageant horse.

The SAJC paid $10,000 at auction last week for a wooden horse advertised as “Nimble … the much-loved rocking horse from the Magic Cave”.

SAJC chief executive Brenton Wilkinson made the winning bid and believed he was buying the original Nimble.

SAJC chairman Tony Newman said: “At no time did I think there might be a ‘stable’ of Nimbles”.

“I didn’t go to the auction as too many people from the jockey club would have probably given our game away but from all our conversations, we thought this was the one and only Nimble.”

The Credit Union Christmas Pageant – which runs the event each year in November – was aware last week of the auction at the Theodore Bruce Auction rooms at Brompton.

Its Facebook page was reassuring fans it still retained the original Nimble and he would be on display again at this year’s pageant. “Lots of talk about the auction of Nimble,” the front page reads.

“Rest assured the original Nimble is still the property of the Credit Union Christmas Pageant and is housed safely at Stardust Castle.

“The Nimble being auctioned is a replica Nimble which was previously used in suburban John Martins’ stores during the time that the Magic Cave had multiple locations.”

Auctioneer James Bruce had estimated the rocking horse would fetch $5000-$7000, but the SAJC paid double the lower estimate.

The horse was previously bought by Port Lincoln identity Chris Nicholls in 2002.

“But in terms of what I’ve just found out (about Nimble) we will definitely be having a word with the auctioneers.”

Auctioneer James Bruce said he announced at the auction that the horse for sale was not “Nimble of the 1930s”.

“I said that the horse was built in the ’70s and was one of the ones used in the John Martin’s stores outside of the city,” he said. “I believe the underbidder knew that but I don’t know if the winning bidder was fully aware.”