Royal visit set to save the Blue Mountains economy 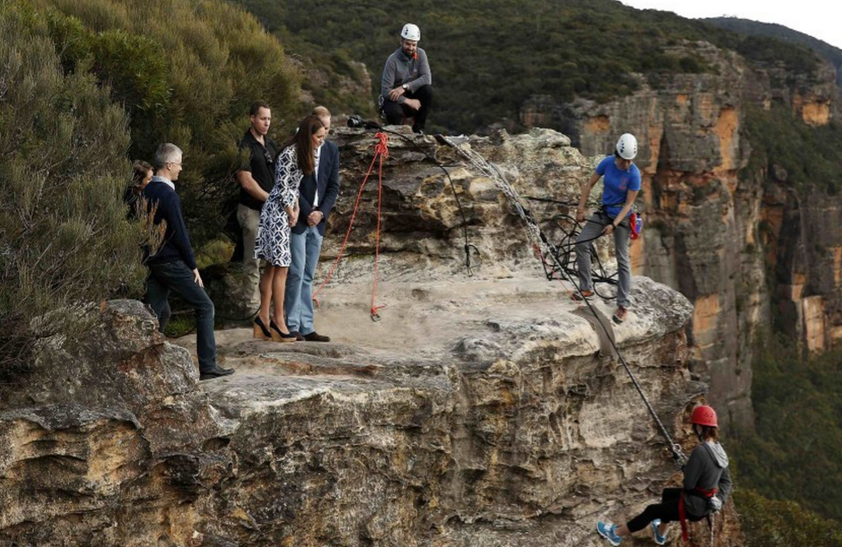 The Duke and Duchess of Cambridge have visited towns in the NSW Blue Mountains, and the locals hope many tourists will follow.

A crowd of 2500 fans packed into Echo Point in the NSW Blue Mountains on Thursday to welcome William and Kate.

The royals, who pulling into the picturesque lookout spot at 1.25pm (AEST), were welcomed by Randall Walker, CEO of Blue Mountains Lithgow And Oberon Tourism, and Anthea Hammon, joint managing director of Scenic World.

Mr Walker says the Duke was surprised to learn Echo Point was the most visited natural location in regional Australia, welcoming up to three million people a year.

“He said the views were spectacular. I told him about the World Heritage Area and he asked if it was part of Blue Mountains National Park.”

Mr Walker told the prince that it was.

He said he was delighted to welcome the royal couple and the world’s media, especially because of the challenging times that followed last October’s devastating bushfires.

“To be able to raise awareness of the destination in such a high-profile and positive way is a fabulous outcome for tourism industry operators and the Blue Mountains community,” he says.

Blue Mountains Mayor Mark Greenhill hopes the media attention from the royal visit will show the world that the region is open for business.

“I see this visit as recognition of the miraculous spirit of our bushfire survivors. They have inspired not just the community of the Blue Mountains but the world who watched as events unfolded,” he said in a statement.

“The royal visit will also focus the world’s media on our beautiful tourist areas and showcase that we are open for business. With 500 jobs lost and a $100 million decline in our economy since the fires, this is a boost we really need.”

Prime Minister Tony Abbott also expected the royal visit to give the region a boost.

The prince described Echo Point as “a beautiful area”.