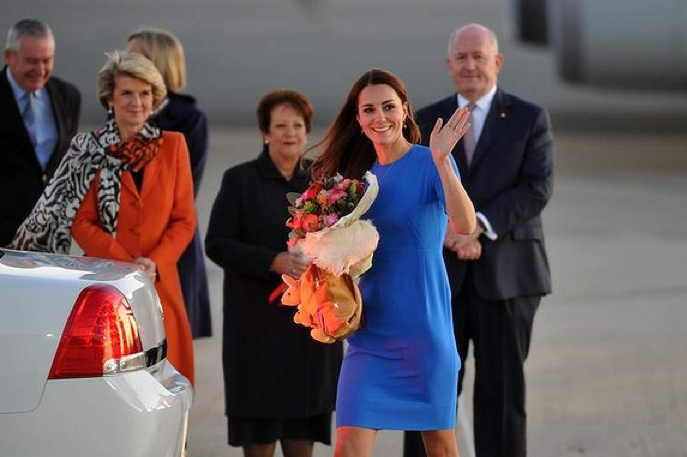 Royal tours are seen as just a photo opportunity to most people in the world, but many people who are excited to see them consider it a life-changing experience.

Millions in England still follow their every move, and imitate their purchases – including trips down under.

On the 21st April, ABC’s current affairs program 7.30 did a report on royal fascination, including how royal-watching has changed as social media follows royalty step-by-step, day-by-day. Some websites even publish photos and publish links to direct sales of the items warn directly beside the photo.

At the minute 3:40 of the ABC 7.30 story (published below), as a sign of the times and what will be a great relief to feminists the world over, a bunch of young girls are very firm on what they don’t want out of life:

Reporter: “Would you guys… would you girls like to marry a prince one day?”

Another late 20s man explains his own fascination with the royals:

“I think there’s a lot of young monarchists out there now because they appreciate the stability that a constitutional monarchy gives you.”

When a reporter asks if he’s copped any flak over being a monarchist, he responds “I actually think that republicanism has become unfashionable in recent times, because they want to change Australia, we love Australia how it is.”

Two young adult onlookers were also asked on camera if they were republicans or monarchists and they admitted they ‘don’t know what that means’.

Whilst the media is a-buzz with fashion industry statistics on sales, Australian state and federal tourism bodies are failing to capitalise on the PR opportunity by releasing statistics on presumably increased website visitation from UK visitors.

The Royals will take part in a special walk after visiting the national park’s cultural centre and the National Indigenous Training Academy.

The couple will also be welcomed with a reception hosted by Northern Territory Chief Minister Adam Giles. Baby Prince George is not expected to make the trip.

Prince Charles and Diana Princess of Wales climbed Uluru in 1983 during their tour of Central Australia.

Decades later, Prince William will not follow in his parents’ footsteps, but rather take a guided tour around the rock with the Duchess of Cambridge and two locals.

One of the guides, Anangu man Sammy Wilson, says they want to teach the Royal couple about the importance of the rock to traditional owners.

“When you’re visiting some sort of place, visit Uluru and we can tell the story about Uluru,” he said.

Interpreter John Sweeney says walking around the rock with a local is the best way for visitors to appreciate the site.

He says the international media will likely miss the real beauty of Uluru.

“It’s not so much that they miss the point,” he said.

More than 100 local and international media personnel have packed into the national park for the visit, which will also include trips to the local training academy and cultural centre.

The Duke and Duchess of Cambridge are also expected to take in the rare sight of water cascading off Uluru.

Heavy rain in recent weeks has seen waterfalls spring to life on the surface of the rock and huge pools gather at its base, a sight witnessed by only about 1 per cent of visitors.

Indigenous leaders will welcome the Duke and Duchess of Cambridge with gifts including a series of dot paintings on paper made of wallaby droppings.

The Duchess will be presented with two gifts, including a necklace and earrings made from local artist Joanne Cooley and a more modern piece by Anangu artist Kathy Buzzacott.

The Duke will be given a handmade wooden shield made by local craftsman Billy Cooley.

They will also be given a series of dot paintings by Anangu woman Barbara Tjikatu and her family.

The paintings tell the story of the local people and about the importance of Indigenous and non-Indigenous people working together.

The paintings are on paper made of droppings from the Mala, the local protected rufous hare-wallaby.