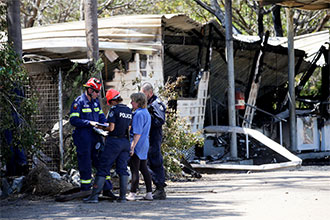 A MT Carbine couple have been left with nothing but the clothes on their backs after a fire ripped through their home and business, leaving it destroyed.

Bruce and Janine Metzger, who run the Mt Carbine Roadhouse, were forced to flee their home next door just before midnight on Sunday as the blaze erupted.

It took emergency services almost an hour to reach the remote town and by that stage the fire had caused irreversible damage to both buildings.

Mt Carbine Hotel owner Nick Bohm said he and Mr Metzger tried to fight it, but their small garden hoses were no match for the inferno.

“Bruce and I tried to put the fire out, but we just didn’t have enough water,” he said.

“There was lots of banging and explosions.

“It was all too late by the time everyone (fire crews) got there. It just looks like a burnt out shell.”

He said Ms Metzger had been able to turn off the gas bottles and the fire never reached the bowsers, but other residents of the tiny township reported hearing loud explosions as the fire took hold.

Mr Metzger suffered minor burns, while his wife was treated for smoke inhalation.

A Queensland Fire and Rescue spokesperson said crews from as far away as Mareeba, Yungaburra and Mossman attended, while a special refilling tanker was also sent from Malanda.

“It was well alight when crews arrived,” she said.

The fire was finally brought under control at 2.15am although crews stayed on scene throughout the night.

Police and fire investigators arrived on scene early yesterday morning as they worked to discover the cause of the blaze.

Mareeba police Acting Inspector Richard Trotter said police were not treating it as suspicious at this stage.

One of the fire trucks also suffered minor damage after hitting a kangaroo on their way back to their station.