Restauranteurs: be careful what you wish for 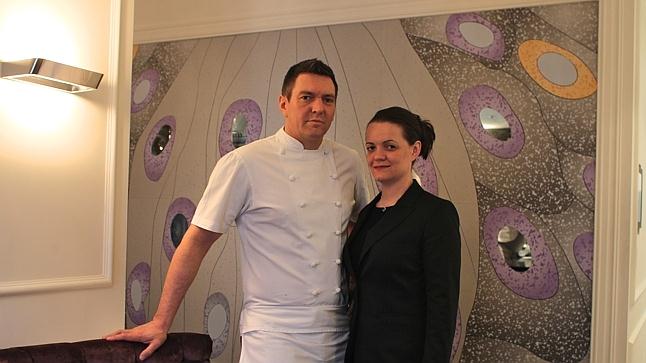 PHOTO: Justin & Georgina North, as pictured for the Financial Review in 2012.

The below article from the Sydney Morning Herald details for the first time the findings of a company that went into voluntary administration in 2012. The AFR article below that, from 2012, demonstrates how the Norths spread themselves too thin, with 6 companies in the Sydney CBD.

He was once a star of Sydney’s restaurant scene, a hatted chef in the Sydney Morning Herald Good Food Guide, and proprietor of three companies, including a flagship restaurant in the city centre with a $4 million, crystal and silk-clad fit-out.

But the downfall of Becasse’s chef and owner Justin North as a businessman was complete on Tuesday when he was banned by the corporate regulator from running restaurants for two years, following the multi-million dollar collapse of his food empire in 2012.

His wife and business partner, Georgina North, has also been banned for 18 months.

The Australian Securities and Investments Commission said the couple failed to discharge their duties as directors of three failed companies with the ”requisite degree of care and diligence”.

“Justin wouldn’t be the first chef to walk away from a business leaving a pretty sizeable debt,” she said.

“Chefs are good at cooking but are not always good at running businesses.”

It marked a staggering fall from grace for the celebrity chef and food author whose flagship city restaurant, Becasse, had just 25 seats and offered a $190-a-head degustation menu, served on ostrich-skin tables.

The restaurant moved to Westfield Sydney in 2011, where its $4 million fit-out also boasted Swarovski crystal chandeliers, velvet banquettes and an entry corridor clad in silk.

It closed in July the following year after the collapse of the three companies – Becasse, Etch Restaurant and North Food Catering.

It its peak, Mr North’s empire employed about 180 people at businesses including cafes, a catering business and a bakery.

However, staff were left owed almost $990,000 in superannuation because the business had not fully kept up with quarterly payments since 2006. Creditors were owed more than $7 million by the three companies.

Mr North made a splash in Sydney’s food scene when he moved here after training with famed chef Raymond Blanc. He opened Becasse with his wife in 2001, fusing French cuisine with modern Australian cooking.

Within two years, Becasse had earned two chefs hats and in 2009 Mr North was named chef of the year by the Sydney Morning Herald Good Food Guide.

But behind the scenes, financial troubles were brewing. Becasse and Etch Restaurant may have been insolvent since 2009, administrators Ferrier Hodgson said at the time of the collapse.

The couple have the right to appeal the ban to the Administrative Appeals Tribunal.

In February, Mr North resurfaced as executive chef at the Centennial Hotel, in Woollahra, where he said he would be offering ”produce-driven comfort food”.

The pub is owned by Anthony Medich, the nephew of property developer and accused murderer Ron Medich.

A portfolio of restaurants run by one of Australia’s most celebrated chefs, Justin North, has become the latest victim of slow consumer spending, calling in administrator Ferrier Hodgson.

The business has been hit by debt accumulated in its rapid expansion since 2005 and low patronage in the early part of the week.

“At the moment it’s just myself and [his wife] Georgia . . . controlling three companies, six to eight different outlets and there are 180 staff, so you can imagine it’s a pretty sizeable operation,” Mr North told The Australian Financial Review.

“We just need to get the right infrastructure to manage that profitably going forward. It’s a very viable business but we’ve just accumulated too much debt to manage on our own.”

“[Closures] are quite possible, but I can’t really give information as nothing is certain at the moment,” Mr North said.

The businesses affected, all in inner-Sydney, include his three-hatted restaurant Becasse, his more casual eateries Quarter Twenty One and Etch, takeaway food ventures Becasse Bakery and Charlie & Co burgers, as well as Quarter Twenty One Providore, which provides ready-to-make meals for time-strapped city workers, The Cookery School and Le Grand Cafe at Alliance Francaise, Sydney.

“When we first did our business plans three years ago, the climate then was very different to what it is now so we have to make a lot of changes,” Mr North said.

The business will trade as usual while the administrators carry out an urgent assessment of the financial position with the help of key stakeholders, including employees, landlords and suppliers.

The first creditors’ meeting will be held on June 20 in Sydney.

The news comes weeks after high-end restaurant Manly Pavilion closed with debts of $590,000. Milsons in Kirribilli and Bruno’s at the Hunky Dory Social Club have also closed.

“I think the biggest issue with us and probably others as well, [is that] from Thursday, Friday, Saturday, restaurants generally do very well,” Mr North said.

“But the inconsistencies at the beginning of the week is what hurt us and a lot of other people. We’ll be doing a lot of tinkering to accommodate that sort of stuff.”

Mr North began his career in kitchens in his home country. New Zealand before going on to work in Australia, the United Kingdom and France. He settled back in Australia in 1999.

Working under executive chef Liam Tomlin at Banc restaurant (which has long been closed), he left to open Becasse in Surry Hills with Georgia.

After winning a plethora of awards, Becasse relocated to 204 Clarence Street in Sydney CBD in 2005 and then to the Westfield Sydney complex in 2011.

The Norths sank about $4 million into their Westfield, Sydney-based food emporium when it opened in April 2011, which included a $2 million, five-year loan from NAB.

Westpac, which they had banked with for 10 years, refused to back the venture.Mr North told the AFR at the time that overall, the emporium needed to turn over $150,000 to $200,000 a week “as soon as possible”. Westfield kicked in an undisclosed amount.He said the loan would be manageable when shared across each business.“But certainly it’s a huge [financial] burden to have,” he said. “You have to try to look forward to five years and one day’s time when you haven’t got it any more.”The Norths, both in their mid-30s, don’t have a wealthy financial backer. They poured in all the cash they had and sold kitchen equipment and other assets to finance the venture. Ostrich-skin leather tabletops, hand-printed wallpaper, and a huge custom-designed Fagor induction stove imported from Spain (the first of its kind in Australia) contributed to the huge fit-out cost.

Ferrier Hodgson said the group’s rapid growth “has led to a number of underlying business issues which must be addressed to assure the long-term viability of the North Group”.

The administration could result in a sale of the business or a deed of company arrangement. “I will be looking at restructure options including the potential for the introduction of new investment,” Mr Sarantinos said.

“This is a well-known and well-regarded business that could flourish if appropriately restructured.”

Westfield said the turnover performance of the North Group at Westfield Sydney had been very strong.

“Becasse, Becasse Bakery, Quarter 21 and Charlie & Co all trade exceptionally well, so we are keen to work with the North Group while it resolves its broader business issues,” Westfield said.

“Based on our knowledge of the organisation’s operations at Westfield Sydney, we expect that these issues should not preclude the voluntary administration process from seeing the business through this period of restructure,” it said.

Mr North said the group was not in this position with the view of shutting up all shops.

“If we didn’t believe we could navigate our way through it we would have put ourselves into liquidation and not administration,” Mr North says.

“Westfield have been incredibly supportive. They obviously want the best outcome.”