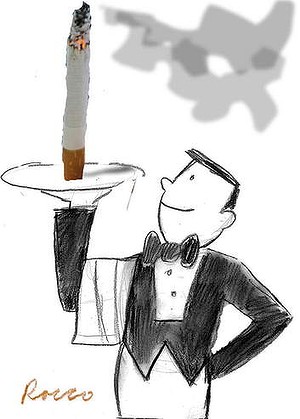 Some Parramatta councillors have initiated the reinstatement of alfresco dining without community consultation or a concensus on the council.

AFTER a two-year battle, smokers will light up their cigarettes again when dining outdoors in Parramatta, after the council surrendered to restaurateurs concerned about lost profits.

”We are so relieved – this is great news,” said Omar Besiso, of the Parramatta Business Freedom Association, a group representing 50 businesses. ”It was never fair that customers could just leave and go to restaurants in Granville or Merrylands, where they could smoke.

”You can’t stop someone from smoking. We just didn’t want to be disadvantaged because our council won’t allow it.”

Cancer Council NSW was shocked by the council’s backflip and said it ignored the dangers of second-hand smoke.

The motion to lift the ban was made by councillor Scott Lloyd late at night as a suspension of standing orders. He was supported by fellow Liberal councillors.

Labor councillor Julia Finn said the motion was carried at the end of the meeting, using a flimsy argument about restaurants renewing their leases. She will lodge a rescission motion to retain and enforce the ban on smoking in outdoor dining areas.

Former lord mayor Lorraine Wearne, who was not at the meeting because of bad health, said she was stunned by the decision.

”I really want to know where the pressure on the councillors came from,” she said.

After the ban was introduced in mid-2010, restaurants presented a petition with thousands of signatures opposing the ban in November that year. The ban was suspended for one year and community consultation began.

The ban was reinstated in May last year after the council found the community supported it.

Last June, a group of restaurateurs formed the Parramatta Business Freedom Association and nine businesses took the matter to the Land and Environment Court. The court ruled the ban had been implemented incorrectly. But the council reworked the ban and reinstated it.

”More than 50 per cent of councils in NSW have taken the step of enforcing a form of a smoke-free outdoor policy, with 74 per cent in metropolitan areas,” Ms Tang said. ”Hills Shire Council and Camden both have policies against smoking in outdoor dining areas.”

Peter Laliotitis, who owns Kouzina Greco on Phillip Street, was relieved. He no longer has to watch ash and butts from cigarettes that have fallen to the ground at his Greek restaurant.

”There was always a big mess because we weren’t allowed to supply ashtrays for our customers, even if they requested it. Now I can put those ashtrays there back again.”