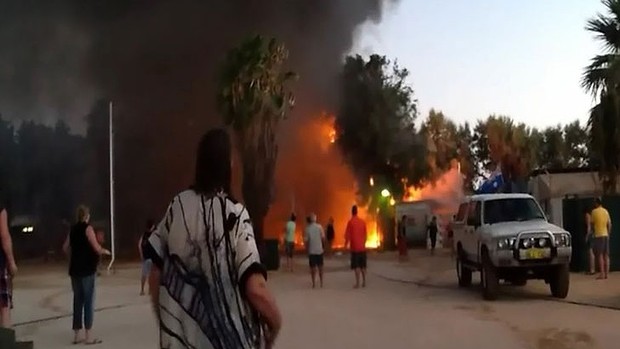 Staff and tourists in Monkey Mia, 850km north of Perth, were left shaken on Friday night after a fire broke out in the Dolphin Resort.

Holidaymaker Jennifer Walmsley told WAToday: “We had just gone over to another caravan for a barbecue around 7 ‘clock when we saw some smoke.

“We all raced over but by that stage one of the cabins was well alight and so were the trees around it.”

Resort manager Martin Grenside said: “We put our fire plan into action and evacuated caravans away from the fire then the resort staff and holidaymakers did what we could to keep it at bay and tried to protect the rest of the resort by dousing anything and everything nearby.”

The nearest volunteer fire brigade is 30km away in Denham.

“I really take my hat off to them, they got here in 25 minutes,” Mr Grenside said.

By then four cabins, a caravan and two other rooms, all staff accommodation, had been destroyed. No guest accommodation was affected.

“By the time the fire broke out the really strong wind from earlier in the day had died down.

“If it had still be blowing hard things would have been much worse.”

A spokeswoman for DFES said the fire has caused $300,000 damage.

The resort remains open for business.