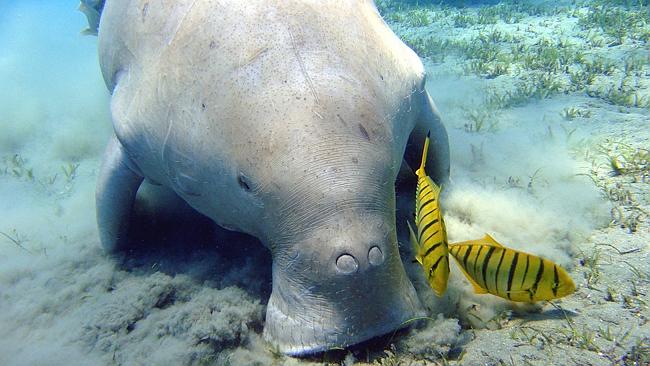 AT RISK: A JCU report has revealed a 6 per cent decline in the populations of dugong population along Cape York. Picture: FLICKERPHOTOS

MORE hunting restrictions on dugongs in the northern part of the Great Barrier Reef may be needed to prevent numbers of the endangered sea mammals dwindling even further.

A report released by James Cook University has revealed a 6 per cent decline in populations of the marine herbivores along Cape York.

A survey of the seagrass-consuming animals carried out last year estimated there were 6500 dugongs in the northern Reef, compared to 15,000 dugongs in Torres Strait.

The researchers from JCU’s Centre for Tropical Water & Aquatic Ecosystem Research said in the report released in September the changes may be caused by several factors, including a lack of seagrass.

The report’s authors have recommended continued ­support for the implementation of community-based management by traditional owners and that authorities examine the need for more dugong “no-take” zones.

The Federal Government has been working with indigenous leaders towards a two-year moratorium on the taking of dugongs.

But the report’s authors point to formal agreements regulating dugong harvest that have not yet been formalised in key areas such as Lockhart River, Hope Vale and the Northern Peninsula Area.

“Traditional Resource Use Management Agreements for the key communities adjacent to the northern Great Barrier Reef are likely to be more ­challenging to negotiate than those negotiated to date,’’ the report said. “We recommend these negotiations are given high priority by the Great Barrier Reef Marine Park Authority and the Queensland Government, especially in view of the dugong population indicators reported here.”

The report also suggests authorities do more to minimise the hazard posed to dugongs and their habitats by the expansion of ports and ­shipping, such as the Wongai coal mine project on the state’s northern tip.

“Water quality impacts on dugong habitat, such as the seagrass of Princess Charlotte Bay, are a critical threat,’’ he said.

He said the organisation was supportive of the report’s recommendations to limit ­hazards to dugongs and their habitat from proposed ports and shipping expansions, as well as a call for ongoing ­support for community-based management by traditional owners.

“The Reef 2050 plan is the perfect opportunity to address these issues,’’ he said.

“Unfortunately, what we are seeing in the draft plan is a failure to link the desired outcomes to real action preventing threats in the North.”