Red wine pushed in U.S. as the drink of strong women 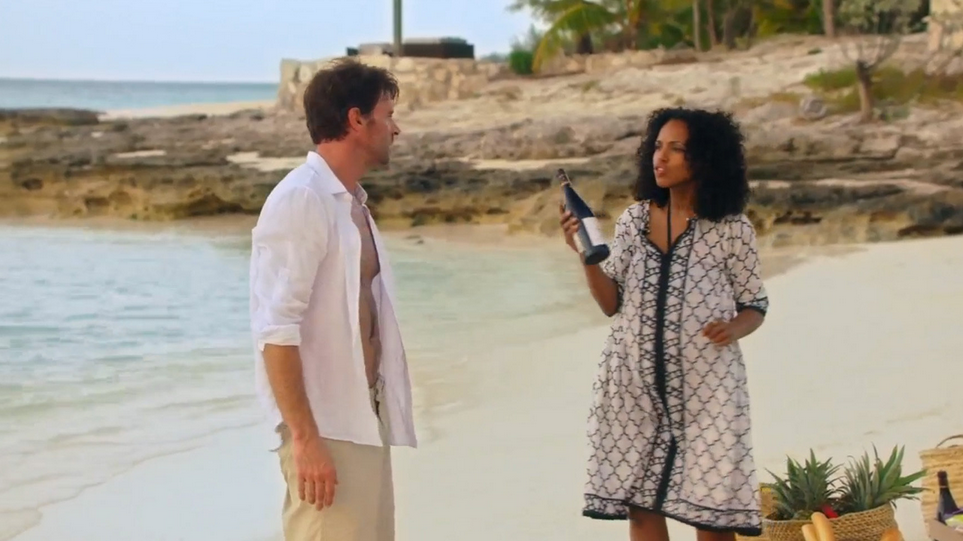 At the onset of the new season of “Scandal,” ABC’s prime-time soap-drama, Olivia Pope, the lead character, has fled Washington, D.C., and world intrigue for exile on a tropical islandwith Jake Ballard, her sometime lover. The only evidence of the rest of the world is a boat that shows up with an important delivery.

“We got the ’94 du Bellay,” she exclaims to Jake of this fictional Châteauneuf-du-Pape. “Only 100 bottles ever made, and now we have five. This will change your life.” He doggedly sticks to beer.

The island idyll doesn’t last for long. Back to work in Washington, Olivia resumes her more typical pattern of wine drinking, fretting in her empty apartment at night over an enormous goblet of red, a little popcorn on the side.

Over at CBS, Alicia Florrick, the high-powered lawyer at the center of “The Good Wife,” wants nothing more than a giant glass of red wine when she gets home from a day of legal maneuvering. She reminisces about her pre-legal days as a suburban wife and mother, when “drinking a glass of wine at 5” was her ritual.

American popular culture has always been awash in alcoholic beverages, but seldom has the drink been wine, red wine in particular, and rarely has it been treated so specifically as a beverage primarily for women, served in oversize goblets and consumed like the after-work cocktails of previous eras. Alicia and Olivia both profess to love wine, but they also drink to self-medicate, to inure themselves to the jagged emotional leaps in plot that buffet their characters and leave their viewers breathless. In theory, it’s a nod in the direction of Humphrey Bogart as Rick Blaine in “Casablanca,”downing shots to dull the pain of Ilsa Lund’s reappearance with another man. In practice, it’s different because it’s wine, not spirits, and those who love wine see it as far more than a numbing palliative for heartache and anxiety.

The way wine is used as a character device in shows like these can tell us a lot about how wine is viewed in popular culture. As much as a small group of wine lovers would like to believe wine has gone mainstream, in fact its portrayal on television as a character prop suggests that many Americans still view it as somehow effete, foreign or, at least, no different than any other alcoholic beverage.

For me, use of wine as a prop is not so much an issue of morals or health as it is of aesthetics. Many Americans regard wine as booze. They go to a bar for a topped-up glass of wine, or drink a glass on the deck at home before sitting down to dinner with a soda. Such a utilitarian view is anathema to classic wine culture, which puts wine at the center of the table, to be savored as a vital component of a meal rather than a stand-alone drink.

“Scandal” and “The Good Wife,” of course, are not the only TV habitats in which wine has a featured role. The women of “Cougar Town”practically worship at the altar of Bacchus, drinking vast amounts of red wine out of whatever is handy, goblet, vase or vat. But it’s played strictly for comedy.

On “Homeland,” the lead character, Carrie Mathison, a bipolar C.I.A. officer, departs from the script by seeming to prefer white wine, or even tequila, sometimes as a chaser to prescription drugs. Her drinking is largely a plot device to monitor the ebb and flow of her mental health as security crises rise at a paranoid pitch. Claire Underwood, now the first lady in “House of Cards,” drinks red wine, alone, at an otherwise empty dining room table. Even Kathie Lee Gifford and Hoda Kotb, the hosts of the fourth hour of the “Today” show on NBC, famously have glasses of wine in front of them at a jarringly early hour. The wine either connotes a convivial, intimate gathering with the audience, or utter artificiality.

No show uses wine more than “Scandal” to portray character. It’s not enough for the audience to infer that Olivia loves wine from her drinking habits. We have to be reminded of it regularly.

“Everyone has a tell,” Olivia’s associate, Quinn, says to her on her return to Washington, explaining how she was able to track her to that island by tracing the purchase of the ’94 du Bellay. “Yours is wine. Red wine. Rare, complex, fantastic red wine.”

As if to drive home that point in the same episode, Olivia stops in at a restaurant frequented by her amoral, manipulative father, Rowan (also known as Eli). Rowan, expecting her, has already ordered her a glass of wine. She picks it up, takes a swig, and instantly identifies it: “Umm, Château Antoine ’91.” (Also, made up.)

But if she is an expert, Olivia treats even the finest wine as if it were a can of beer. She habitually grabs goblets by the bulb rather than the stem, as a wine lover would. She never swirls and sniffs, the ritual that non-wine drinkers alternately find amusing, affected or annoying. She guzzles rather than sips.

Alicia does the same, but then she makes no claim to care about the nuances as a connoisseur would. She drinks wine simply for its alcoholic effect. But Olivia? It can’t be mere carelessness that blinds writers to her lack of technique. There are wine lovers even in Hollywood who would note such behavioral inconsistencies. It must be a matter of choice by the writers.

Why must the women drink only red? In the thinking of popular culture, red wine is assertive and action-oriented compared with white wine, which offers a prissy, indecisive connotation. White wine is for wimps, with the exception of Carrie. But then Carrie has swagger by definition; white wine connotes the skittishness of her mental instability. Red wine would be too solid for her character.

As assertive professional women operating often in the sphere of men, the characters of both Olivia and Alicia must drink red, even in their private moments. They are permitted to be vulnerable but can’t betray themselves to the audience as white wine weak.

For all her love of red wine, Olivia would appear off-putting if she adopted the mannerisms of the connoisseur. They would seem precious, more appropriate for fops like Frasier and Niles from the old sitcom “Frasier,” whose connoisseurship was used to connote fastidious vanity. Gladiators, as Olivia and her associates style themselves, don’t swirl. They gulp.

While red wine helps to make women seem forceful, it would do the opposite for men, conveying too contemplative a concern with pretty things. They might as well recite poetry.

In “Scandal,” with one exception, men don’t drink wine. Jake wants only beer, the kind advertised on football games. The president, that would-be Duke of Windsor who wants Olivia to be his Wallis Simpson, mopes about with amber whiskey in his crystal glass, reveling in his romantic misery. If any character would seem to be a white wine drinker, it would be this self-indulgent, solipsistic president. Still, he’s the leader of the free world, a former fighter pilot, who must occasionally rise to Kennedy-esque moments of decisiveness. No wine for him.

His wife, Mellie, has plenty of her own sorrows to drown, which she does with white spirits — vodka or gin, not wine. At heart, she’s a schemer, a brilliant doer, a fascinating counterpart to Olivia boiling with a frustration that must be tamped down firmly with booze, not gently with wine.

Among the men, only Olivia’s father is a wine drinker, red, of course. She credits him with instilling in her a love of red wine, and their shared passion symbolizes their blood tie. Connoisseurship is also in keeping with his cover — Rowan’s “command” of the clandestine B613 organization, but he poses as a curator of antiquities.

More to the point, Rowan is devious and depraved, yet deludes himself into thinking he serves a greater good. That the devil is a fussy aesthete, “a man of wealth and taste,” should come as no surprise to anyone steeped in popular culture. That wine cannot simply be wine is no shock either.