Queensland gives up on Clive Palmer 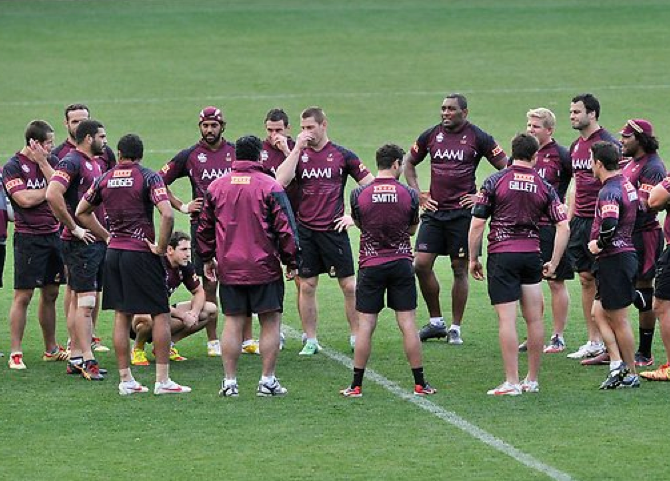 TTN: In the last month, the Queensland Maroons have abandoned Palmer Coolum Resort as their training place, and resort villa owners have plotted to take their properties back by force. A national newspaper piece has detailed the embarrassment of a $536 a night resort that is dirty, enshrines pictures of Clive, and keeps guests awake at night with wailing fibreglass dinosaurs. See the three aggregated stories below.

Maroons pass us by

THE winning partnership between the Queensland State of Origin team and the Palmer Coolum Resort is over.

Queensland Rugby League chief executive Rob Moore said the board had voted to split with the resort.

“At this stage we haven’t decided on a new training base,” Moore said.

Coach Mal Meninga, though, is expected to take his champion squad back to the luxurious five-star Sanctuary Cove, where he plotted the third of the Maroons’ eight successive series victories in 2008 – the year young guns Greg Inglis and Israel Folau made their Origin debuts.

Losing the Origin team camp would be a major blow to the Palmer resort and its owner Clive Palmer, who purchased it from the Hyatt Regency group in 2011 for a reported $80 million.

The resort, which has drastically reduced its staff numbers since Mr Palmer took over, has already lost its signature event, the Australian PGA Championship.

PGA of Australia officials were involved in several skirmishes with Mr Palmer over course advertising and sponsorship in 2012.

They declined to renew their deal with the tough-talking mining magnate and the tournament made its debut at Royal Pines on the Gold Coast last November.

Mr Palmer said in a statement his resort had regularly hosted the Queensland State of Origin team and always welcomed “the mighty Maroons with open arms”.

“We are proud to have been part of the team’s record-breaking run of series wins over NSW,” he said.

“In 2012, Palmer Coolum resort made a special dedication to the late, great Arthur Beetson, a man who inspired us all with his prowess on the rugby league field and was one of the game’s great immortals.”

The resort had transformed its golf driving range into a full-sized rugby league field before each Origin game.

From the Daily Telegraph, 1st March 2014

CLIVE Palmer, the unlikely darling of the ABC, had two Tony Jones outings last week, most recently on Lateline, where he expounded on aviation matters while snuffling and snorting like Darth Vader in an iron lung.

When Palmer supported the LNP, the ABC treated him like a fat buffoon.

Palmer is licking his rosebud lips in anticipation of power to come. But first he has to get through a re-run of the WA Senate poll, and there is every chance that voters might wise up to the gimlet-eyed ­opportunist beneath the fleshy jocularity.

He’s been on the ABC’s flagship shows, Lateline or Q&A, on average once a fortnight since the election, and is treated like royalty.

So much so that he calls Tony Jones a “great journalist”, a “world champion”. Which is a strange comment from someone supposedly from the right side of politics.

But Clive is a special case.

But Clive is a special case. The billionaire Gold Coast mining entrepreneur is feted by the Left like Lee Harvey Oswald was by the Russians – before they realised he was a lunatic.

A turncoat conservative is a rare prize to be carefully cultivated. Especially one full of colourful bile who, by an accident of electoral history and lots of cash, has found himself in a position to wield enormous power.

Palmer is a loose cannon who deserves scrutiny.

But the ABC’s interest is not the investigative probing of The Australian’s estimable ­reporter Hedley Thomas, who has dug out facts on Palmer’s wealth, business dealings and numerable legal stoushes so that the Australian people can judge whether they have themselves a pig in a poke or a pearl in the parliament.

Is Palmer an altruistic self-made man under siege from a media controlled by a Chinese Mata Hari? Or is he a tyrant who inflates his wealth and achievements?

But what the ABC seems most interested in is what Palmer will do to foil the Abbott government in the Senate.

There was a time when the national broadcaster delighted in mocking Palmer, always running footage of him waddling onto his private jet, collapsing onto a kingsize seat and promptly falling asleep with his mouth open. ABC cameramen have lost count of the apnoea snorts they’ve captured for posterity.

Those were the days when Clive and his juicy rolls of filthy lucre were valued members of the LNP family.

Like the night of the hung election in 2010, when he squeezed onto a couch at the Four Seasons Hotel alongside party grandees, crunching numbers himself on a little silver laptop perched on his lap, loudly proclaiming results to all and sundry.

Now it’s up to the voters of Western Australia to tell ­Palmer his novelty honeymoon is over, and he can’t have the two extra Senate berths he wants.

He was incorrect, as it turned out, but, hey, it was a tough election to call.

He soon felt scorned by Campbell Newman and Tony Abbott, who failed to recognise his unique political acumen, so he started his own party and tweaked into parliament with two senators.

Now it’s up to the voters of Western Australia to tell ­Palmer his novelty honeymoon is over, and he can’t have the two extra Senate berths he wants.

Regardless of how the ABC portrays him, a serious country facing serious economic difficulties cannot afford to be held hostage to his ego and self-interest.

You just need to go to the former five-star Palmer ­Coolum Resort on the Sunshine Coast, which he bought three years ago, for a vision of a Clive-controlled future.

A continuous spool of Clive videos plays on the in-room televisions.

Just read the reviews on ­TripAdvisor to see how Palmer treats the little people who pay $536 a night to stay there.

“This is a ‘resort’ where everybody — staff and guests — are a little embarrassed to be there,” wrote one disappointed guest last month.

“In the restaurants there are large photos of the fat owner looking as if he is some egotistical ruler,” wrote another ­reviewer. “Such a shame it has gone so far downhill.”

“The entire weekend was a comedy of ­errors,” wrote Natasha.

“WE WOULD NEVER GO THERE AGAIN EVEN IF IT WAS FREE!”

“I am past angry, I’m ­offended,” wrote Natalie, after spending $536 a night for nine nights last month. “Stay away. Stay far, far, away.”

That is good advice for WA voters, too. FED up with being locked out of their own villas at Clive Palmer’s near-empty Queensland golf resort and dinosaur park, angry owners are set to take matters into their own hands.

Madeleine Gilmour, a 71-year-old retired Sydney barrister, is heading to the Sunshine Coast with other owners this weekend on a mission to retake their properties, by force if necessary.

A skirmish will pit a group of mostly elderly investors against the federal parliamentarian and Palmer United Party founder who bought the Coolum resort from Lend Lease three years ago.

The showdown looms amid costly litigation and a dramatic staff slump from more than 650 to fewer than 90, and occupancy to near-zero as visitors snub robotic dinosaurs and vintage cars.

“We will pleasantly and politely ask for access to our villas and if they do not give this to us, we will go en masse with a locksmith and see what happens,” Mrs Gilmour said yesterday. “We have title to the villas and we own everything in them, from the sheets to the floor coverings to the cutlery. It has been almost two years since we have had normal access. In January, I was told I had to pay $685 a night to stay in a villa at the resort . . .

“The situation makes me very angry because Mr Palmer does what he likes. I think he would like to be rid of us for next to nothing so that he can redevelop, but we’re not going to get out of his way.”

Another owner, Michael ­Nugent, 77, a villa part-owner for more than 20 years, said: “We are not allowed to go there any more — at reception they say ‘no, that’s not possible, you can’t stay’. I think it is a great idea to now take matters into our own hands. It may be the only way to get access. I have been furious about it. We’re still paying levies. I feel Clive Palmer has destroyed the resort.”

Long-time supporter Chris Shannon said owners were prepared to bypass security on the villas’ doors by having the doors taken off.

“While most may support this approach or similar we are hopeful that Clive Palmer doesn’t take this matter to the extent where forced entry is required,” Mr Shannon said.

Services, including water and power to the villas, were cut off in 2012, making it difficult for owners to use their properties for which they paid more than $110,000 for one-quarter shares.

A letter was sent by the resort’s general manager to the villa owners two years ago “regretting to advise of the disconnection of power and utilities due to non-payment of monthly accounts”.

The owners dispute that the accounts have not been paid. Mrs Gilmour claimed Mr Palmer’s companies’ unpaid levies amounted to over $1 million.

Late last year, Mr Palmer rejected the claims of owners and said: “They’re not locked out of their villas.”

In response to questions yesterday, Mr Palmer replied by text: “Your imagination is frat (sic) u (sic) should write movie scripts for Fox.” The resort’s general manager, Simon Stodart, said: “I won’t be commenting.”