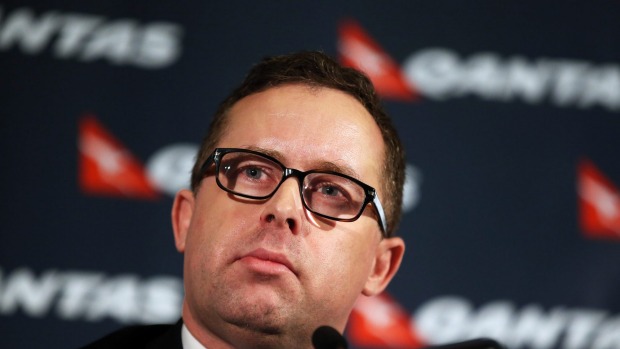 TTN, 24th June 2015 – Qantas are trying to forcefully stop the publication of a memoir written by the woman who was Alan Joyce’s speechwriter at the time of the 2011 grounding of the Qantas fleet.

The decision to ground the fleet, taken almost solely by CEO Alan Joyce, was an industrial relations move aimed at breaking the airline’s heavily unionised, and expensive, workforce. Joyce was brought into Qantas as a ‘union buster’ – he’d previously worked for Rio Tinto and had a track record in breaking tough unions. Qantas famously pay the highest rates to airline staff in the world, and some pundits suggest Jetstar, and its focus on the south east Asian region, was created almost solely to combat Qantas’ flagship brand’s Australian union problems with low-paid SE Asian staff.

It’s not the first time Qantas have tried to squash an author. Fairfax journalist Matt O’Sullivan wrote Mayday in January 2015, and other stories broke about Qantas at that time across Fairfax newspapers.

Qantas responded by pulling The Age, The Financial Review and The Sydney Morning Herald from all of Qantas’ airport lounges and aircraft. This is an unsurprising move by a corporation, a move designed to intimidate a publication like Fairfax out of information that might damage an advertiser’s brand. However Qantas’ high-end key consumer – the business person who chooses Qantas over Jetstar, prioritises quality over price – is the Fairfax consumer.

As during the industrial dispute, Qantas stakeholders were again left wondering how far Alan Joyce would go in cutting off his nose to spite his face.

Author Lucinda Holdforth was served with orders at her Sydney home from Qantas lawyers Minter Ellison to appear in the NSW Supreme Court at midday on Wednesday.

Qantas is seeking an order to stop disclosure or publication of the contents of her manuscript, titled “Fighting Words”.

Holdforth wrote the speech for Mr Joyce’s infamous grounding of the airline’s entire fleet in October 2011 to break a standoff with its unionised workforce.

She was present at secret meetings of senior Qantas managers in the weeks before the 2011 grounding, which is regarded as one of the most radical decisions in Australian industrial relations history.

Qantas will argue in court that her book should be suppressed because she will be breaching her confidentiality agreement with the airline if it is published.

The airline said in a statement that “senior staff in all companies are aware that discussions and internal documents covering a range of topics are confidential to that company”.

“Ms Holdforth ignored that duty to keep such material within Qantas. She has written a manuscript seeking to exploit for personal gain confidential internal information that she was privy to,” the airline said on Tuesday night.

“Qantas had no option but to take action to prevent Ms Holdforth from breaching her obligations to the company.”

Holdforth has written speeches for Mr Joyce as recently as several months ago and the legal action puts a question mark over her contract with the airline.

Holdforth declined to comment about the case on Tuesday night but she has previously told Fairfax Media that “it’s a very personal memoir about the craft of speechwriting and my life and experiences as a speechwriter”.

“I have worked with lots of interesting people in politics and business so a few familiar names may come up,” she said early this month.

“I do think [Qantas] is a fascinating company and some of my speechwriting adventures with Qantas will no doubt be included.”

She has said her book will not be completed until next year.

She is also the author of True Pleasures: A Memoir of Women in Paris, which introduced readers to the “Rule-breakers and style-setters, these women were utterly diverse, yet they shared one common passion – Paris, the world’s headquarters of femininity”.