“Quality is everything”: How small pizzerias compete 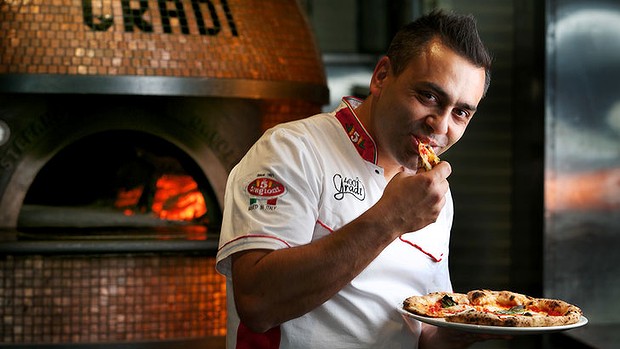 Australia is in the midst of a pizza war, with the major chains dramatically slashing their prices. Both Pizza Hut and Domino’s now offer pizzas for pick-up for $4.95. So how are small pizzerias supposed to survive in such a competitive climate?

According to those in the fray, the secret is to trade on quality, not quantity, and be smart about what you offer and how you market it.

According to Johnny Di Francesco of 400 Gradi, on Lygon Street in Brunswick, Victoria, who recently won the title of world’s best pizza in Parma, Italy, his business doesn’t really compete with the major chains.

Lino Maglione is not solely focused on money.

“They compete with each other. But if you look at the quality, we’re actually price-competitive. We pay up to $40 a kilo for buffalo mozzarella. The chains would pay between $5 and $8 for cheese, but they don’t use real mozzarella,” says Di Francesco.

“We don’t use processed products on our pizzas, everything is fresh and of the highest quality you can find. I think people understand the difference between the two products.”

In terms of the customer base Di Francesco targets, he says he goes after a broad market, especially families. But some people’s palates are just used to Pizza Hut. “For first-time customers, we tell them they need to eat our pizzas at least three times to re-educate their palate.”

As to the long-term effect the “pizza wars” will have on the market, Di Francesco says they are treading a fine line by continuing to drop their prices. “I’d hate to know what they are actually using to produce their pizzas.”

So has Di Francesco ever eaten a pizza from one of the big franchises? “I might have eaten Pizza Hut as a kid, but as an adult, no.”

Lino Maglione, owner and head chef of Itali.co, a pizzeria based in St Kilda in Melbourne, says the main difference between his business and the major chains is that he’s not solely focused on money. His father and grandfather were also in the pizza business back in Naples, Italy, and he has a passion for pizza as a result.

He says people understand the difference between what the chains offer and the artisan-style product he makes. “In terms of price we can’t compete, but we set ourselves on a different level. There’s nothing wrong with what the chains do, but you can’t expect something traditional, made with care, for that price,” says Maglione.

He also says there’s only a small part of the market that’s very focused on price. “My customers want to come to a place that’s cool, where the service is attentive, with an attractive wine list,” he says.

But Maglione also says no matter what type of pizza a business makes, it’s still important to cater to the public’s tastes. “Some products like sea urchin or botargo [cured, salted fish roe] are harder to sell.”

He says a really well-trained front-of-house staff is essential in encouraging diners to try different things. “Even when people go to a pizzeria, service has to be restaurant quality because many ingredients people don’t know and it’s important to explain it to them so they are not guessing.”

Jasmine Selimi, manger of Vincenzo’s Pizza and Pasta, in Merrylands, Sydney, says with Pizza Hut and Domino’s just around the corner from her business, how to respond to their competitive threat is something that her and her husband Sam and his sister Fiona are constantly thinking about.

“It’s not viable for us to drop our prices by that much. We try to maintain a premium market segment, but you still need to offer deals that are attractive to customers. Deals are a way for us to be noticed, but the reality is we still have walk-by traffic that end up at Domino’s because we can’t compete on price,” says Selimi.

“We try not to directly compete, but we’re not a global chain and we can’t get produce for the prices they get. We also use different produce – we prepare everything on site, we don’t buy anything in bags or frozen,” she explains.

In terms of her clientele, she says in the week it’s generally smaller families and couples, and on the weekends they tend to attract larger family groups, when the big chains are not offering deals.

Selimi says she expects the big chains to keep cutting down their costs, but that “we don’t want to get sucked into that vortex.”

“Even if the pizza giants continue to lower their costs, we will not allow ourselves to be bullied into a position where we will have to compromise on quality as that is not how our mother raised us. Quality and family is everything.”