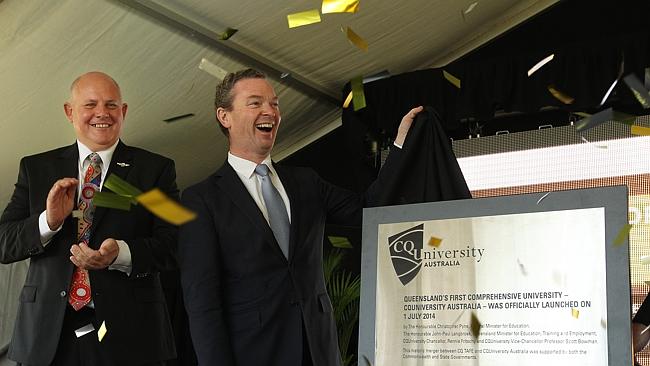 In September last year, the state and federal governments finalised a deal to merge CQUniversity and TAFE campuses across central Queensland.

The merger sees $130 million in TAFE assets combined with $74 million in federal funding to form the new entity.

Today at the CQUniversity campus at Ooralea, south of Mackay, Christopher Pyne will officially unveil the partnership.

Vice-chancellor Professor Scott Bowman says the merger will provide opportunities for students to cross over.

He says the merger has been well supported by all levels of government.

Similar events to the Ooralea one will be held at Rockhampton, Gladstone and Emerald campuses.

Central Queensland education communities, students and both the state and federal education ministers are attending the launch from 10am at Mackay Ooralea Campus.

CQ University leadership are to  outline their big vision for the new institution, and for Central Queensland.

The partnership, backed by $73.8 million in Federal investment, and $120 million in Queensland Government assets, makes the newly-merged CQUniversity the biggest regional university in Australia – with more than 2000 staff, and 35,000 students across 19 locations.

“This is the first partnership of its kind in Queensland, and I’m confident our new comprehensive university will transform our region – delivering new opportunities, new pathways for students, and new investment in our local skills base,” Professor Bowman said.

Staff and students from the two institutions were also invited to their local events, and Professor Bowman paid tribute to their hard work in supporting the comprehensive transformation.

“This historic event would not have been possible with the support, good-will, and determination of our staff, and the faith and patience of our students, over the past two years,” Professor Bowman said.

“Today I am proud to welcome all of them to the new, comprehensive CQUniversity.”

CHRISTOPHER Pyne has fired a warning shot at the nation’s peak sandstone universities, saying they could be undercut by regional competitors if fees were raised too high once the sector was deregulated.

Launching Queensland’s first dual-sector university, created by the merger of the Central Queensland Institute of TAFE and CQUniversity, the Education Minister said “exponential’’ fee hikes by the Group of Eight would rebound on them, opening the door to regional operators to expand market share.

Mr Pyne, who has been delegated by Tony Abbott to reach out to Clive Palmer now that his party has the balance of power in the Senate, also expressed confidence that the Palmer United Party would back the government’s controversial higher education reforms.

Regional operators such as CQU were positioned to capitalise on the reforms, potentially at the expense of the big capital city universities.

“Universities like CQU will pitch their fees to the market that they represent and that means they will be able to keep their market share or in fact grow it.’’

Mr Pyne said the merger, backed by $74 million in federal funding and $120m transfer of state-owned infrastructure, would put CQU “ahead of the curve’’ in taking advantage of the government’s higher learning reform package.

CQU joins dual-sector universities in Victoria and the Northern Territory. But Mr Pyne said it was a matter of “horses for courses’’ whether other universities and TAFEs merged. “The point of the government’s education reforms is not to tell the market or the industry what to do; it’s to say, you let the consumers choose what kind of institution they want you to be,’’ he said.

Vice-chancellor Scott Bowman said it had taken nearly five years for the merger to finally come to fruition during which time both state and federal governments had changed and the policy environment radically altered. But the patience and nerve required to turn idea into reality had done little to erode Professor Bowman’s perpetual perkiness.

“There are two types of universities: those that see change, wring their hands and say ‘Oh woe is me’. And then there are others that lick their lips,” he said. “We are a lip-licking university.”

“People have written off CQU lots of times,” he said. “But we are seeing lots of potential in these changes. We are licking our lips.”

And unlike the recent renaming of Ballarat University to Federation University Australia, CQU will stick with its name.

“We are calling the merger a new university with an old name. But if we were to start this journey again we would probably change the name to better reflect just how new and different this is.”