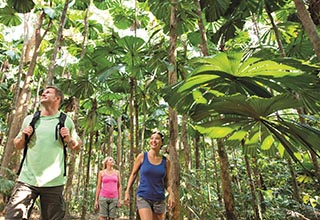 TOURISM operators will have an easier time accessing the Daintree under new State Government rules that aim to unlock national parks and other protected areas for the region’s millions of visitors.

But while the burden of red tape is eased, Mr Dickson insisted robust environmental safeguards would remain in place to protect the Daintree’s 120,000 hectares of heritage-listed rainforest.

Among the reforms, 15-year agreements will replace the current three-year permits, which were restricting tourism businesses from expanding their operations or setting up shop in the first place.

“North Queensland has delivered great operators and for the first time, we’re given certainty about the future,” Down Under Tours director James Dixon said.

Down Under Tours has operated in the Far North for almost as long as the Daintree has been enshrined on the World Heritage List and Mr Dixon said the old rules were making it hard to do business.

Mike D’Arcy, who runs the four-wheel drive tour company D’Arcy of Daintree, said reducing red tape and opening up the Daintree for local operators would be a positive.

“If the system reduces the unused permits and opens it up to actual operators and good operators that has to be a good thing,” he said.

But Mr D’Arcy said the overhaul should go further and ensure tour guides have undergone appropriate training, such as the tour guide course offered by the Wet Tropics Management Authority.

The state’s new policy, called Queensland Eco and Sustainable Tourism (Quest), will reduce the amount of reporting required of businesses by two-thirds, and also offer incentives to the most eco-friendly operators.

Federal accreditation is still required before a tourism operator can venture into national parks or protected areas.

The push for new eco-tourism attractions in the state’s vast tracts of protected wilderness emerged last year after the Destination Qtourism forum held in Cairns.

As well as the reforms announced yesterday, the State Government is taking expressions of interest for new privately-owned eco-tourism ventures in parts of the Far North.