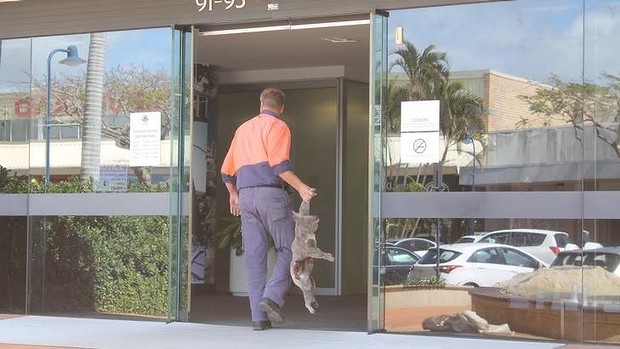 TTN: A Queensland man has taken a dead koala into his local council to protest the council’s apparent inaction on a road hazardous to koalas. The event appears to be staged, with Fairfax media’s photographer on-hand first when the man picks up the koala and secondly when he enters the council building.

Fed up with what he says is a lack of protection for koalas, Darren Mewett has sent Redland City Council a gruesome message by dropping off a dead koala to its offices. Photo: Judith Kerr

A resident has sent Redland City Council a gruesome message after dropping off a dead koala to its Bloomfield Street offices.

Thornlands resident Darren Mewett warned council it was in danger of losing its reputation as a koala safe haven, after scraping up the dead animal from Springacre Road where he had found two other dead koalas in the past year.

Mr Mewett blamed the animal’s death on the council for failing to put in place permanent measures to save wildlife on the 80km/h rat run.

He said he took the bloodied carcass of the mature male koala in to council on Tuesday to highlight the lack of adequate action, which he said was the result of lobbying from nearby residents wanting to sub-divide land in the area.

“This time, I decided to take the koala in to council because no action was taken the last time I reported a dead koala and my comments were not taken seriously,” Mr Mewett said

“This council operates under a fallacy, spruiking there are koalas here and they are protected but it is all just talk.”

Darren Mewett retrieves the dead koala from the side of the road. Photo: Judith Kerr

Council said it put two temporary flashing signs on Springacre Road for two months from June 2013 warning drivers to slow down to avoid hitting animals and koalas near Eprapah Creek, where the koala was killed.

It also put two temporary flashing signs on nearby Bunker Road but said all had to be removed after they were all damaged by motorists.

A permanent sign advising motorists of wildlife in the area was also erected.

Council said it would investigate what could be done to make the road safer for wildlife after Mr Mewett’s most recent complaint.

Redland Koala Action Group president Debbie Pointing said signs needed to be erected immediately as koalas were on the move during breeding season from August to December..

“Some residents in that area have been trying to convince people there are no koalas there but this is absolute proof that they live near the creek,” she said.

“This is a message to the council to take into account koalas in future planning of the area not just the landowners who want to sub-divide and make money.”