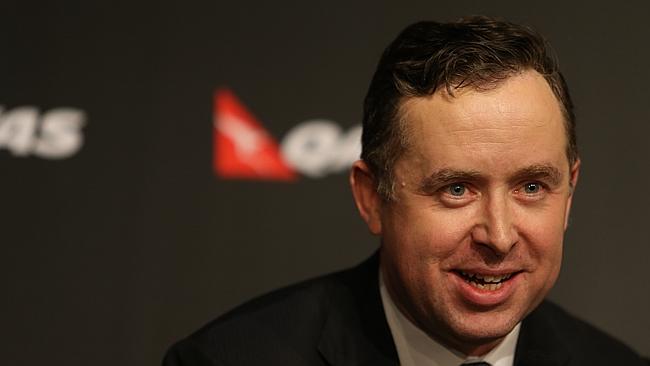 Download/ Play the Audio of Radio National’s interview with Fairfax journalistMatt O’Sullivan here. O’Sullivan is the author of ‘Mayday: How warring egos forced Qantas off course’.

TTN: There are a lot of interesting details in the Radio National interview – Matt O’Sullivan’s book examines the tangible and intangible plane wreck that has been Qantas for the last 10 years. For example; prior to Alan Joyce’s appointment as CEO, Joyce lead Jetstar whilst his main rival for the top job John Borghetti was a senior executive. When Borghetti was denied the top job, Borghetti defected to Virgin Australia. When Joyce grounded the Qantas fleet in 2011, he left 90,000 loyal Qantas passengers stranded all over the world, forced them into the arms of competitors – but Jetstar remained in the air during that time.

The fateful text message was sent to Lyell Strambi, head of operations at Qantas Airways, just before 5pm on the last Saturday in October 2011. It simply read, “We are go.”

“With those words, the die had been cast. There would be no turning back,” writes Matt O’Sullivan in the new book Mayday: how warring egos forced Qantas off course.

O’Sullivan, a journalist at Fairfax Media, gives a dramatic account of the most radical decision in Australian industrial relations history, the grounding of the Qantas fleet by chief executive Alan Joyce and chairman Leigh Clifford.

With that three-word text message, the Qantas fleet was grounded, worldwide. Some 98,000 passengers left stranded; people going to weddings, funerals, business meetings, even leaders gathered at the Commonwealth Heads of Government meeting in Perth, all left in the lurch.

“By the end of the day, Qantas would book 10,247 passengers into hotels, including 8485 in rooms in Asia, Europe, the US and South America, and 1762 in Australia’s state capitals.”

It could be said that as far as industrial relations battles go, the showdown on the waterfront has had a more profound effect but for pure shock value nothing surpasses the Qantas grounding.

Contrary to the official line from Qantas management that the decision was made after bloody-minded action from the unions that year at the annual shareholders’ meeting, O’Sullivan reveals that the grounding almost happened two weeks earlier.

The option of locking out staff and grounding the fleet, he writes, had been contemplated in secret for some time.

Was it all worthwhile? Could the showdown have been avoided and accommodation struck with the Qantas workforce without such a dramatic disruption to customers?

According to O’Sullivan, senior Qantas executives still say they had no choice. The fight with the unions had to be brought to a head.

Joyce, described as a polarising figure, as much revered by the right as despised by the left, is now on the verge of pushing through an 18-month pay freeze. He has settled a slew of enterprise bargaining agreements with the engineers and the short-haul pilots, though issues remain with Jetstar.

There were unintended consequences of grounding the airline, however. By effectively inviting 100,000 passengers to try a rival carrier, Alan Joyce did his arch-rival John Borghetti at Virgin a big favour.

Joyce, Borghetti and former chief financial officer Peter Gregg had all been in the running to succeed Geoff Dixon as CEO. The mathematician from Dublin, Joyce, got the job and the bridesmaid Borghetti went off to run Virgin, where he is considered by many to have outmaneouvred Joyce.

The grounding enabled Borghetti to shake off Virgin’s marque as a discount carrier and reshape it as a full-service airline, a viable alternative to Qantas for business travellers and rusted-on Qantas clientele.

Just last week he was still giving Qantas the niggle. In a nifty stroke of PR, Virgin declared it would eliminate fuel surcharges from its US route. Fares would consequently drop $40.

That put Qantas in rather a ticklish position as its surcharges on the same route tote up to $680 per airfare. As oil prices rose in recent years Qantas stacked on the surcharges but only now, as the price has halved, has it reduced them. It responded by cutting by $110 a fare and wrapping the surcharges into the overall ticket price.

Luck of the Irish

The plummeting price of jet fuel has been a boon for Alan Joyce. Only last year the airline was pleading with the federal government for assistance. It had also pursued the Gillard government for help in years past.

The bitter battle in the domestic market between Virgin and Qantas – as the latter aggressively sought to defend its 65 per cent market share –has been terrific for customers but cost Qantas dearly. It notched up the worst loss in its 94-year history last year, conceding $2.8 billion in red ink.

This week though, UBS put out a research note forecasting a billion-dollar pretax profit for the airline, rising to $1.7 billion the year after. You could say Joyce has had the luck of the Irish. No doubt Qantas will put the performance down to management’s transformation plan, which kicked off early last year, though the fall in oil has sent airline stocks around the world heading north.

The fortunes of Qantas may have changed quickly and dramatically, but it won’t last forever. In aviation, the salad days are short and the big profits are a long time in the making. The complexity of aviation, avid competition, sensitivity to external factors such as volcanic events in Iceland, and the extremely high fixed costs of running an airline make this an unenviable sector for investors.

You don’t have to be given to outlandish conspiracy theories to surmise that the oil cartel may put the choke on supply again soon, now that a plethora of higher-cost energy projects around the world are shutting down. Once enough of the newer competitors in energy have been forced out of the market, higher prices will prevail.

For now however, Qantas is in a sweet spot perhaps redolent of its last big stroke of good fortune when mainline rival Ansett collapsed in 2001. Then, Qantas was offered to buy Ansett for $1 and take on its obligations. It declined, picking up 90 per cent of the market instead. Now it is back to a duopoly. The third player Tigerair is controlled by Virgin.

From The Australian, 8th December 2014

QANTAS chief executive Alan Joyce has declared war against Fairfax Media, pulling millions of dollars in advertising revenue from The Sydney Morning Herald and The Age.

The Australian understands Mr Joyce is also planning to dump the Herald and The Age newspapers from distribution at the aircraft, gate and lounge of the entire Qantas Group, including Jetstar.

The boycott follows concerns by Qantas executives that these newspapers had failed to show impartiality when covering the airline’s industrial dispute over the past year.

There has also been the perception that The Herald and The Age were favouring Qantas’s direct competitor, Virgin.

When Qantas launched its new Feels Like Home advertising campaign in early November, it did not spend a dollar in The Sydney Morning Herald, Age or Fairfax regional newspapers, either in print or online.

The campaign spend was multi-million-dollar, with ads up to two minutes long running in prime-time television along with print, online, outdoor and cinema spend.

The only Fairfax paper to receive advertising dollar was The Australian Financial Review.

From next year, both Qantas and Jetstar will also pull The Herald and The Age from on board its aircraft and at the gate, leaving passengers to read The Australian, The Daily Telegraph, The Herald Sun or the AFR.

The removal of the newspapers will undoubtedly affect circulation results posted by Fairfax. Qantas last year bought 800,000 copies of The Herald and 500,000 copies ofThe Age.

Qantas executives questioned why they would continue to spend money with a media company that constantly criticised the airline and published reports it saw as inaccurate.

The Sydney Morning Herald’s business and aviation writer Matt O’Sullivan has written a book titled May Day that examines how Qantas became a ­“national liability”.

The book’s release early next year comes as Qantas is recovering after a hellish three years when it cut 5000 jobs and posted a bottom-line loss of $2.8 billion.

Since that time, Qantas’ share price has risen by almost 30 per cent and Mr Joyce has indicated the worst for the airline is over. He said Qantas had been profitable on a pre-tax underlying basis in the first quarter.

When asked about the ad spend, Qantas’ head of brand, marketing and corporate affairs Olivia Wirth said: “We determine which media outlets are best to work with on the basis of who can most effectively reach our existing and potential customer base.”

Qantas may not be the only companies to stop advertising with Fairfax newspapers. The subject was discussed at the Business Council of Australia dinner in late October.