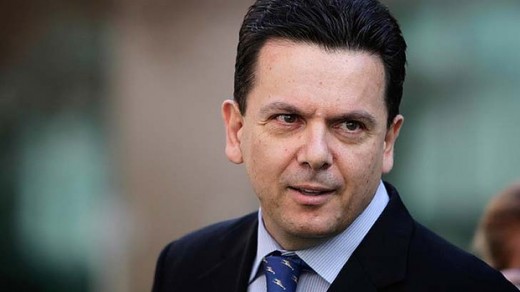 “…Independent Senator Nick Xenophon… says the debate about changing the Qantas Sale Act is a distraction, and the financial management of the airline should be subject to a full judicial inquiry. He’s suspicious about the results for Jetstar International, which in 6 months has gone from a $128m profit to a $16m loss.

“”I’m suggesting that in terms of what is occuring with Jetstar there are serious questions to be asked: has Qantas International looked much sicker than it actually is as a result of there being a shifting of the books; perfectly legal under our current consolidated accounting rules. But what I’m saying to you is what is occurring here is nothing short of a scandal, that Qantas has been asserting that Qantas International is the sick puppy of the fleet, of the group, whereas in fact it’s been Jetstar. What has occurred in Jetstar in Asia is a scandal, I suggest that hundreds of millions of dollars have been lost there, not one dollar of trading profit has been repatriated back to Australia, that is what a judicial inquiry needs to look at because it is in the national interest for Qantas to remain as our national freight carrier, in Australian hands.”

“Nick Xenophon says the jobs of the Qantas CEO Alan Joyce and the airline’s board should go before the 5000 announced today.”

TTN 27th February 2014: Qantas’s 5000 job cuts announced today have hit the already suffering employment markets of Adelaide and Victoria the worst. Qantas’ Perth>Singapore route has been canned, whilst other ‘unprofitable’ routes to be cut were not named, and in more bad news for tourism operators, ticket prices will continue to rise. Nick Xenophon says that Jetstar’s year-on-year profitability doesn’t add up.

Losses at Qantas International widened from $91m a year ago to $262m in the first half and the Jetstar Group lost $16m, down from profit a year ago of $128m.

Qantas announces 5000 jobs to be axed

Qantas has posted a $235 million half-year loss and announced that 5,000 jobs will go.

The airline posted an underlying before tax loss of $252 million for the six months to the end of December, which was at the lower end of a $250-300 million loss forecast by Qantas late last year.

However, Qantas chief executive Alan Joyce says the result is unacceptable, and the airline will slash 5,000 full-time equivalent positions in an attempt to return to profitability.

Qantas domestic reported a profit of $57 million, slumping from $218 million in the same period a year earlier, while the international division’s loss increased to $262 million from $91 million a year ago.

Jetstar also suffered, swinging to a loss of $16 million from a profit of $128 million a year ago, although Mr Joyce says the domestic component continued to be profitable.

What are your thoughts on the announcement of job cuts from Qantas? Have your say.

“We have the only profitable carriers operating in the domestic operation today,” the Qantas CEO said.

“We haven’t added as much capacity as our competitors have over the last few years, they’re absolutely employing the position of adding capacity even though they are losing a significant amount of money and their strategy is loss-making.”

In another plea for Federal Government intervention, Mr Joyce attributed much of the airline’s problems to “a giant wave” of extra airline seats added mainly by what he says are government-owned foreign carriers.

“Many have far lower labour and other costs, they’re often spurred by national economic development goals rather than profit targets, and they have the backing of their governments to raise capital,” he argued.

Qantas’s frequent flyer program was by far the most profitable part of the business, reporting a record profit of $146 million.

This program will involve a reduction of 5,000 full-time equivalent positions out of more than 30,000 staff currently employed by Qantas.

The staff cuts come despite an acknowledgement by the airline that its labour efficiency has improved by 22 per cent since 2008.

Qantas says it will also cut capital expenditure, such as on purchasing new aircraft, by $1 billion over the next two financial years.

It says there will be significant changes to fleet and network plans.

Strategically, Qantas says it will suspend new growth for Jetstar in Asia and instead support existing businesses.

Key network changes include scrapping the Perth-Singapore route early next financial year, reducing the use of wide-body aircraft for domestic flights and using them mainly for east-west coast and peak Sydney-Melbourne-Brisbane routes and re-timing the services between Melbourne and Heathrow to minimise ground time in London.

Key fleet changes include retiring all Boeing 767-300 aircraft by early 2015 because of their fuel inefficiency, retiring the six oldest 747-400s by early 2016, deferring the delivery of the eight remaining Airbus A380-800 aircraft, deferring the last three of 14 Boeing 787-8 Dreamliner orders and restructuring its A320-200 orders.

Qantas also announced this morning an agreement with Brisbane Airport Corporation (BAC) to dispose of its terminal lease.

The airline says it will receive $112 million as part of the deal, and still retain exclusive use and operational control over much of the northern end of the terminal until 2018.

BAC will assume control of the retail space, and has committed to upgrading the facilities in the terminal.

Qantas says it is in continuing discussions with Sydney and Melbourne airports over its terminals there.

Invast’s chief market analyst Peter Esho says, while the loss came in a little smaller than expected, losses from the international division were surprisingly high given all the restructuring that has already taken place.

“Qantas is shrinking as a business and its international success into Asia is still many years away, if ever,” he wrote in a note on the result.

“We think there will be huge pressure now on Joyce and the board to respond to the massive job cuts.”

Mr Esho says, right now, most investors are waiting to see what the Federal Government does regarding a potential debt guarantee for the airline.

“The Government guaranteeing Qantas financially is the most sensitive question now in terms of market valuation,” he explained.

“The share price is unlikely to rise significantly until this is announced and any rally might see sellers until this is quantified.”

Rival Virgin is not benefitting from its competitor’s woes, however, with its shares easing by 0.9 per cent to 34.7 cents.