Councillors fed up with Wet’n’Wild Sydney 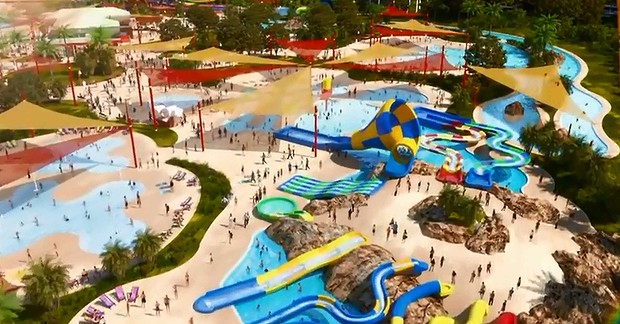 “One Cube Entertainment, an external entertainment promotions company organizing the event, has made the decision to postpone the planned NYE Festival promoted at Wet’n’Wild Sydney due to a major technical production issue. A new date has been selected for the event, which will now take place on Australia Day 2014 (Sunday 26 January). A spokesperson for One Cube Entertainment stated “We have made the very difficult decision to postpone our New Years Eve event at Wet’n’Wild Sydney. This decision is in the best interest of our patrons due to some last minute production issues. We sincerely apologise for any inconvenience caused and are currently working on something even better for Australia Day at Wet’n’Wild Sydney. This new lineup will include the addition of some brand new headliners being announced shortly.”One Cube Entertainment will begin to issue refunds for all tickets through a hotline that will be established on Thursday, 2 January 2014.Alternatively check www.nyefestival.net.au for more information.”

Wet’n’Wild’s many problems have councillors fed up

The shutdown of Wet’n’Wild’s NYE Festival with six hours’ notice was a ”heavy-handed approach” that showed ”disregard” for the community, western Sydney councillors say.

Touted as the ”the biggest and best water theme park ever built”, the Prospect site has been plagued with problems, culminating in the cancellation of Tuesday’s event that stranded 9000 revellers.

”It was very poor organisation by all parties,” Blacktown councillor Tony Bleasdale says. ”If this happened again it could lead to complete disillusionment with Wet’n’Wild.”

Blacktown councillor claims to have been ”inundated” with complaints about the $120 million Wet’n’Wild development.

On Wednesday the promoters of the cancelled festival, One Cube Entertainment, agreed to give ticket-holders refunds. Many had spent up to $200 on a single pass.

”The promoters have been urged to move quickly to provide refunds,” NSW Fair Trading Minister Stuart Ayres said. ”The last thing we want is a repeat performance of this debacle.”

Since the park opened three weeks ago, Cr Bleasdale said he has been ”inundated” with complaints about the $120 million development. Parking costs, ticket and food prices, access, transport and venue capacity were among the string of complaints he had received in the past three weeks.

”It’s a great thing for western Sydney but it’s not financially viable for families to buy tickets,” he said. ”The pricing structure needs to be urgently revisited to include flexible family passes.”

Blacktown councillor Edmond Atalla said the park often reached capacity by 11am, blocking access for season-pass holders. He said customer complaints ranged from not being able to bring food into the venue (with customers forced to pay ”unreasonable” prices for meals on site), to waits of ”up to 20 minutes” to enter the car park.

”If they’re not careful it could end up like Australia’s Wonderland,” Cr Bleasdale said. ”What undid them was cost. A lot of people are saying to me they’ve been once and won’t go again.”

On the first Saturday of the public school holidays, several rides were closed and the park put up a ”full house” sign, turning away visitors. It temporarily reached capacity on three days during the Christmas period, and on December 20 a thunderstorm forced the park to close.

A spokesman for Wet’n’Wild Sydney, Darrin Davies, said: ”During peak periods we encourage people to stagger their arrival times. People can often come in the late afternoon and find we’re not at capacity.” He said the park ”represented great value for money” and those who bought season passes ”achieved exceptional value for their dollar”.

Cr Atalla said while the venue provided transport from Parramatta railway station, the lack of buses from Blacktown was forcing customers to walk along a dangerous stretch of the Great Western Highway to reach the entrance.

Blacktown resident Sandra Tangata-Toa paid $380 for a gold season pass for her family in November but said she was unlikely to renew her commitment next year. ”I think the park is great but there are a lot of hidden costs, like the $10 charge for using the lockers,” she said.

The NYE Festival promoters blamed the cancellation on a ”major technical production”. A contractor for Village Roadshow said the organiser’s ”management plan for crowd control and safety failed to meet Wet’n’Wild’s standards”.

On Tuesday afternoon, the organisers promoted an alternative New Years Eve event at what was to be the festival’s after-party venue, Parramatta’s Roxy Hotel. A spokesman for the hotel said about 800 people attended and the ”majority” of music acts on the NYE Festival bill performed.