Public service catering: where the real money is 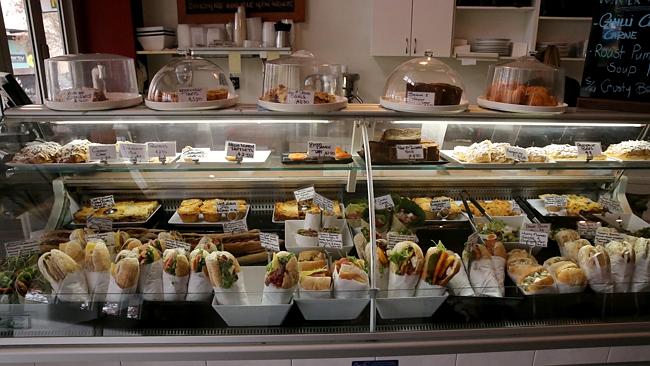 From the Adelaide Advertiser, 14th June 2014

Public servants truck $833,516 worth of gourmet sandwiches and sweets 10kms across nation’s capital

HUNGRY public servants have charged taxpayers $833,516 for gourmet sandwiches, friands and flourless chocolate cake from a boutique bakery since the 2010 election.

The Australian Public Service Commission has confirmed it ran up the extraordinary bill, claiming it provided for a “modest’’ morning tea, lunch and afternoon tea selection for public servants at training courses.

In charge of ensuring “best practice’’ public administration, APSC also spent nearly $8 million since the Rudd-Gillard government was elected in 2007 on resorts, banquets and travel for public servants at training retreats across the country.

While the Abbott government has ruled out abolishing APSC, its serious gourmet sandwich habit is likely to prompt a review of catering contracts.

Despite having more than a dozen takeaways and catering companies within walking distance of APSC’s Woden headquarters in Canberra, officials have awarded 20 catering contracts to the Idelic Cafe. Source: News Corp Australia

From the Boathouse on Blackwattle Bay in Sydney or Peppers Manor in the southern highlands, to Crowne Plaza, Surfers Paradise, public servants were wined and dined as they were instructed on the finer points of conflict resolution, how to write speeches and how to influence the public service.

In Canberra, a selection of gourmet sandwiches, friands lightly dusted in icing sugar, and sparkling mineral water was on offer as public servants were instructed on how to prepare question time briefs and how to prepare for a grilling at Senate estimates.

Despite having more than a dozen takeaways and catering companies within walking distance of APSC’s Woden headquarters in Canberra, officials have awarded 20 catering contracts to the Idelic Cafe, a boutique bakery located 10km away in Canberra’s up-market Kingston cafe strip at a cost of $833,616.

But a respectable, albeit slightly less glamorous, ­option was available downstairs in the very same building as APSC. Since 2008, catering services for the Woden Training Centre have been selected from the commission’s catering panel on the basis of value for money. Source: News Corp Australia

Officials concede they don’t know exactly how much the gourmet sandwiches cost but argue that it was money well spent.

A spokeswoman said: “The provision of on-site catering is an efficiency measure that increases development time by significantly shortening meal breaks or enabling groups to work through meals when ­required. On-site catering provides training program participants with a modest morning tea, lunch and afternoon tea.

‘‘The cumulative cost of catering reflects the scale of the operation.

“For example, in just the past three years there have been more than 25,000 person days of training provided. However, numbers have ­declined over this period as budgets have tightened.’’

Since 2008, catering services for the Woden Training Centre have been selected from the commission’s catering panel on the basis of value for money.

Idelic Cafe manager Bobby, who asked that we not use his surname, said it was an open tender process like any other.

“It’s a tendering process. It’s just the quality of our food,’’ he said.

The commission claimed that training conducted at boutique hotels across Australia was also an entirely legitimate expense.